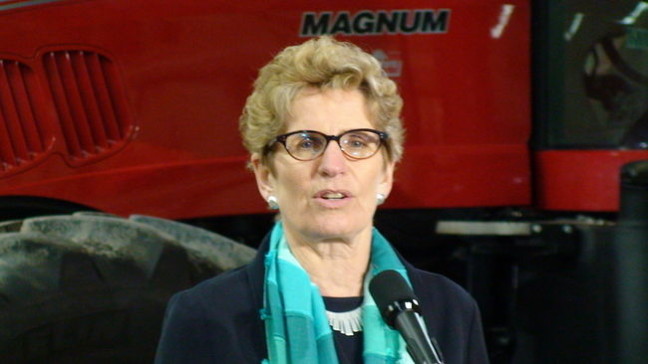 No matter how you slice them, it is difficult to make the two titles work together. But how you say them is but a tiny problem in comparison to how you combine the two jobs and do them both well.

Wynne mentioned after she won the Liberal leadership she would serve a term as agriculture minister. It seemed like a good idea at the time. Under Premier Dalton McGuinty, agriculture was no more than an afterthought.

Time and again the policies of the ag ministry worked against, instead of for, farmers.

On one hand, the ministry hit small abattoirs in the province with such burdensome and often ridiculous regulations that many closed.

At the same time, the government was promoting local food — you know, eat food produced within 100 kilometres of home to help local farmers.

With no abattoir within 300 km, that becomes pretty difficult.

But those are only part of the concerns.

The full name of the ministry is the Ontario Ministry of Agriculture, Food and Rural Affairs or OMAFRA.

As much as agriculture and food production are in serious need of attention, there are major issues under the broader “rural” heading.

Main among these is the placement of wind turbines, an issue that has torn communities, rural churches and even families apart.

In addition, the government has trampled the democratic rights of rural residents in its attempts to kiss up to overseas corporations that bring us the giant wind turbines.

Much of Queen’s Park sees the opposition to giant turbine developments as simply the “not in my backyard” kind of thing.

As much as there is some of that involved in fighting turbines, it is a relatively minor sector of the opposition.

Setbacks of turbines from rural homes are a major part of the issue for all kinds of reasons, including noise and the danger of ice flying off the turbine blades in the winter months.

And yet the province allowed a turbine to be built by the United Auto Workers at the union’s retreat at Saugeen Shores on Lake Huron.

By anyone’s estimation it is far too close to residential areas for safety— plus it is an eyesore to end all eyesores for an area that depends on tourism for much of its economic activity.

In addition, there is mounting evidence that people living close to turbines suffer from all kinds of health problems — some so serious they have been driven from their homes.

And no, Queen’s Park doubters, not all these folks are hypochondriacs or attention-seekers as you think.

Many suffer real ailments that are destroying their enjoyment of life.

These serious rural issues, and many others, must be addressed immediately and not just because the Liberals need to win back some of the rural seats they’ve sacrificed in their single-minded focus on big cities.

They must be fixed because it’s the right thing to do.

It will be a miracle if any individual can give these issues the attention they deserve, while serving as premier of a province that is out of money and credibility after the Dalton McGuinty years.

Throughout the Liberal term the only relationship between the province and rural Ontario was the blinders.

At Queen’s Park, officials wore them whereas out in the boonies, we put them on our mules and horses.

About the Author: John Lyons