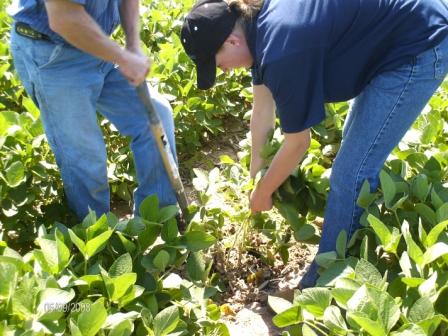 From the OMAF Field Crop Report

Canola -Harvest is over 80% complete in southern areas with yields mostly averaging 0.8-1 t/ac. Northern Ontario has large percentage of the crop swathed. Uneven maturity is resulting in higher than normal green seed in harvested canola. Leaving canola in the swath longer to reduce green seed only works if seed moisture is above 20%, and a killing frost has not occurred. If storing canola for even a short period, aeration is critical to remove field heat, and even out moisture variations to prevent hot spots development. Weed seeds, and foreign material can cause canola to heat quickly. The high oil content takes longer to cool and becomes rancid easily if not stored correctly. Canola has much higher density than cereal grain, and needs higher fan horsepower to properly aerate.

Edible Bean-Harvest has been slow with only the earliest planted fields harvested. Bulk of the harvest will occur over next 10 days, weather permitting. Seed size is smaller than so far. Uneven maturity is the biggest challenge. Pre-harvest herbicides are generally taking 2-3 weeks before fields are ready to harvest. Check with your dealer on correct pre-harvest timing and permitted products. Fall is optimum time to control perennial and winter annual weeds prior to wheat planting. Weeds will be most effectively controlled when they have not gone to seed and are actively growing. Perennial weeds will be moving food reserves into root system and this makes them much easier to control in the fall.

Winter cereal seeding continues as harvest allows. Growers seeding wheat after hay should add 50 lbs/ac KCl (0-0-60, potash) with the wheat seed. Chloride in the potash affords some suppression of Take-All, a disease which can cause significant yield loss when wheat follows hay. Target a uniform seeding depth of 3 cm (1-1.25”) where soil moisture is adequate. Early wheat benefits most from shallower seeding depths, allowing quicker emergence and more rapid root development to anchor plants and protect from frost heave next spring. As planting dates move into late October, seeding depths should move slightly deeper to provide soil as “insulation” to protect against cold injury and frost heave.

Growers fighting or fearing they have glyphosate resistant Canada fleabane should use fall weed control options to control this weed. Glyphosate plus Eragon preplant gives excellent fall control and some spring residual, with fall applied Infinity able to control germinated fleabane in any emerged wheat crops. This is one of the best opportunities to reduce resistant weed populations.

Soybean harvest started although most fields still need another 7-14 days to dry down. Leaf drop is progressing quickly. Yield reports so far have been variable, ranging from 30 to 60 bu/ac. Harvest losses and mechanical damage may be high when moisture drops below 12%. A loss of just 4 beans per square foot equals 1 bu/ac. The vast majority of fields are now mature enough that a frost will not impact yield. Frost damage during the first half of September in northern areas has lowered yield potential in those fields affected. If soybean yields are well below expectations without any obvious cause send a soil sample to a lab to check for soybean cyst nematode (SCN). This information will help in future management strategies. Counties that have not traditionally experienced SCN pressure are starting to see large yield reductions from SCN. A soil survey conducted this year by the Huron Soil and Crop Improvement Association has shown that a significant number of fields in Huron county have SCN pressure and this is likely to be true in other non traditional SCN areas as well.

Alfalfa-If there is an immediate need for forage, you can reduce but not eliminate the risk of alfalfa winterkill due to harvesting during the Critical Fall Harvest Period by cutting close to the expected “killing frost” (approximately -4°C or 25°F for a few hours). Minimal root reserves will be used by the alfalfa following this killing frost. Be aware that after a frost the feed value of alfalfa declines quickly due to leaf loss and nutrient leaching. Leaving at least 6 inches of stubble will help trap snow to insulate the alfalfa crowns during cold weather and help prevent freezing and frost heaving. Stubble will also protrude through winter ice sheeting, should that occur and prevents the ice sheet from smothering the alfalfa. Heavy stands of grasses or red clover left unharvested can sometimes smother over the winter because the top growth forms a dense mat. In contrast, alfalfa loses most of its leaves as soon as there is a hard frost, and the remaining stems seldom pose any risk of smothering. Further details on fall harvest of alfalfa can be found in “Taking That Fall Cutting of Alfalfa” at http://fieldcropnews.com/?p=5098

Pasture-When grazing fall pastures leave more/higher/extra residual plant material in the field. During September and early October plants are preparing for winter by storing energy reserves in the roots or in the case of grasses the base of their stems. Leave 6 inches (15 cm) of residual forage height in your pastures at this time. Be extra careful on any alfalfa based pastures as frosted alfalfa has an increased risk of causing bloat until the frosted leaves have dried. The following link has info on managing bloat. http://www.omafra.gov.on.ca/english/livestock/beef/news/info_vbn0713a2.htm