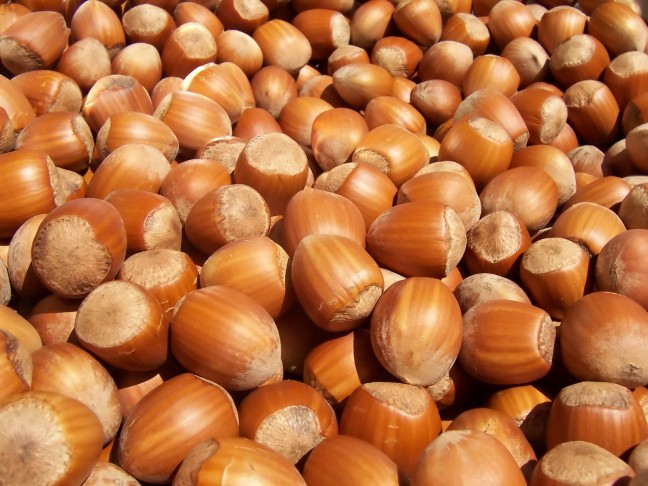 It’s been a rollercoaster harvest for British Columbia hazelnut growers, as they continue their battle against devastating eastern filbert blight.

The disease plagues many growers, some of whom report losses similar to last year’s across-the-board negligible production. Then, blight and poor growing conditions reduced the overall crop to just one-fifth its normal size.

But this year, some growers are reporting record production. Better summer growing conditions and good pollination in the spring helped the trees cope with the blight, they say.

“It’s given us a hopeful outlook,” says farmer Peter Andres, president of the BC Hazelnut Growers Association. “In my orchard, I had a bumper crop, like nothing I’ve seen since 1995.”

He knows, though, the blight issue has not been solved, or barely even addressed. Blight has first appeared in the Abbotsford area in 2002 and has spread north throughout the hazelnut-growing region. No controls are available to stop it.

Once the EFB gets into the trees, it takes about two years to see evidence of it, with die-back and dead branches. After about another two years, trees slowly wither away with fewer green leaves, because the tree limbs and trunk are girdled, cutting off the food supply. Andres says the disease is in every farm in the Fraser River Valley, but the healthier trees can handle it much better.

Still, he feels it’s just a matter of time before the disease permanently reduces production levels.

So he’s urging farmers who had a good harvest to not feel a false sense of security.

“We need to be cautious regarding the disease, so that we continue using good management techniques, and that we be vigilant with EFB,” he says.

Management strategies for EFB include reducing infection through aggressive pruning and spray programs. But these both have drawbacks — at best, they only slow the spread slightly, they’re costly and the equipment for mechanically pruning is not readily available.

That makes planting resistant varieties probably the best long-term strategy, economically and for sustainability. And that means planting EFB-resistant stock.

Andres is advocating a replant program for the industry so growers can remove diseased trees and orchards, and replace them with highly resistant and more productive varieties that are now available.

These varieties have been developed in Oregon, where the disease took hold more than 30 years ago. Andres says growers there have replanted more than 5,000 acres since the disease-resistant stock has been available to growers.

The Canadian border is closed to imported trees, but researchers here can work with tissue culture from resistant trees to develop their own stock. Some of those trees are now being planted on B.C. farms on a trial basis.

“We must prepare for a time when the EFB will permanently reduce production levels,” he says. “If we do enough replanting we should continue to have a flourishing industry.”

Meanwhile in Ontario, Todd Leuty, agroforestry specialist with the province’s ministry of agriculture and food, says this year’s hazelnut production there was fairly good.

Cultivar trials are underway at the Simcoe research station and Vineland research station, where researchers are testing several dozen cultivars to determine their potential for Ontario conditions.

Leuty says eastern filbert blight disease is a serious problem in Ontario, too. Allowing the cultivars to become infected is an important step in determining tolerant cultivars.

“We are expecting the cultivar trials to soon be affected by filbert blight disease,” Leuty says.

He says industry knows a number of the good cultivars are very susceptible to infection, and the 2013 growing season provided good conditions for infection by blight disease. Frequent rains in spring and early summer were ideal for infection.

“The next four or five years should tell us lots about the potential cultivars for Ontario, for use by Ferrero [a major processor], for fresh markets and hopefully many other profitable uses for hazelnuts,” Leuty says.