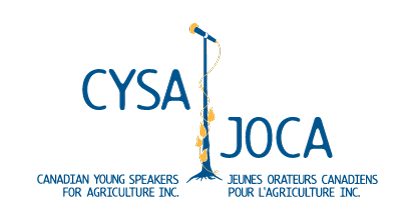 Canadian Young Speakers for Agriculture board members unanimously approved the following public speaking competition topics for 2014 at their first meeting of the new year:

I am a Canadian farmer and this is my success story
Why succession planning is crucial to the future of Canadian agriculture
As stewards of the land can Canadian farmers do more?
Why social media is an opportunity farmers cannot ignore
Why I am choosing a career in agriculture

Each year the renowned public speaking competition is held at the Royal Agricultural Winter Fair in Toronto. This year’s competition will be held on Saturday November 8, 2014. The competition is open to youth ages 11 to 24 with a passion for agriculture whether raised on a farm, in the country or in the city.

This year also marks the competition’s 30th anniversary. “Since the inception of CYSA in 1985, the competition has grown into the premier agricultural youth speaking forum in Canada”, said CYSA Board President Richard Kuntz. “With this year’s line-up of exciting topics the competition promises to once again present a high caliber event featuring the ag leaders of tomorrow. We invite youth from across Canada to participate and share their passion for agriculture.”

Canadian Young Speakers for Agriculture is a national, bilingual competition that gives participants an opportunity to share their opinions, ideas and concerns about the Canadian agri-food industry in a five- to seven-minute prepared speech.

Since the first competition was held at the Royal Winter Fair in honour of the International Year of the Youth in 1985, it has gone on to become the premier public speaking event in Canada for young people interested in agriculture, with more than 900 participants in total over the years. For more information about CYSA visit www.cysa-joca.ca