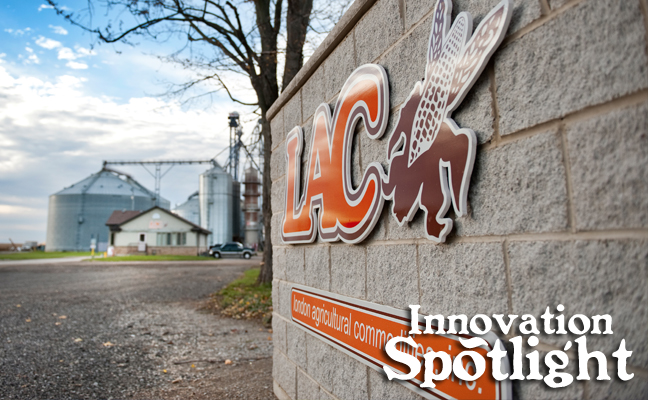 London Agricultural Commodities (LAC) is privately held enterprise that operates two facilities in Chatham-Kent, has several marketing arrangements with independently owned elevators throughout Ontario.  Through our London office, LAC markets a variety of grains around the world.

In Tupperville, LAC purchased the T.H. Taylor Company elevator in 1994, which has been operating since the 1920’s.  Within two years the facility was fitted with a 440,000 bushel bin (the largest in Ontario at the time) and a GSI Tower dryer which was also the first in Ontario.  Since then there have been multiple expansions to the facility including new larger receiving pits that can handle over 20,000 bushels per hour, an additional tower dryer, three more large bins over 490,000 bushels each and two temporary storage pads that can handle over 350,000 bushels each; bringing the total storage of the facility to 3.3 million bushels.  The addition of new equipment and retrofitting the existing portions has allowed for a safer, more efficient facility with the ability to expand further and allow for more of Chatham-Kent’s products to reach the world.

The Thamesville location has become primarily the food grade bean division, which receives, grades, processes and packages Food Grade beans to be shipped to Japan, Malaysia, China, and Hong Kong, Singapore, Taiwan, Philippines, Vietnam and European countries.  The original elevator was built in the early 1960’s was refurbished in 2010 with state of the art seed cleaning equipment.  In addition to being able to process food grade beans to the highest standards, an automated packaging line was installed to be flexible to a variety of customer’s needs worldwide.

LAC is proud to have locally grown Chatham-Kent grain to process, ship and Feed the World.