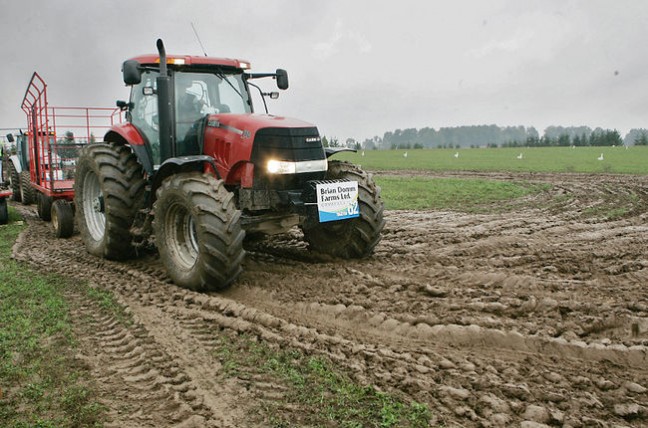 From the Chatham Daily News

The municipality is well on the way to reaping what the Chatham-Kent Plowmen’s Association has sown for the community.

The 2018 International Plowing Match (IPM) was awarded to Chatham-Kent during the annual Ontario Plowmen’s Association convention in Stratford Saturday.

“We were quite confident that we were going to get the approval of the group here,” said Rob Sterling, president of the Chatham-Kent Plowmen’s Association. “I have to give the credit to the farmers because that’s really what triggered this.”

Sterling said he was approached by farmers earlier this year asking what was needed to bring the IPM back to the municipality. Chatham-Kent has previously hosted the five-day event during the third week of September in 1979 and 1919.

“The response I got was, ‘We need land to host it,’” he said. “They stepped up to the plate and were willing to commit some land.”

Sterling and the committee worked quickly securing over 1,000 acres in the Pain Court area to host the event and crafted a powerpoint presentation highlighting the attributes of agricultural community and Chatham-Kent as a whole.

Mayor Randy Hope, councillors Frank Vercouteren and Karen Herman, Kim Cooper, the municipality’s economic development officer for agriculture and town crier George Sims were at the convention when Sterling presented to the 200-plus members before they voted on the issue.

“It showed that we have the backing of our municipal officials and that really meant a lot when we did our presentation,” said Sterling. “The support of our municipality will be critical in many ways while putting on this event.”

The municipality pledged $100,000 seed money over five years in 2013 when the CKPA approached council about submitting a bid for the plowing event.

“A lot of people know the attributes that we have here in Chatham-Kent as far as our agriculture, but this will bring it even more to a provincial, national and even an international stage” said Cooper. “Our slogan, ‘We grow for the world’ is going to be very well known leading up to this.”

Economically, Cooper anticipates the competition, which draws over 200 competitors from across Ontario, Michigan and Ohio, will bring growth to tourism as well catch the eye of investors.

“As far as agriculture I think it puts us at the forefront. We’re in the process of trying to attract more processors here,” said Cooper. “We’re hoping for spinoffs not only here with our farming sector but people looking to invest. That’s one of the goals of economic development to grow the economy in various ways and this is one of them.”

In the last three years the event has brought anywhere from 60,000 to 90,000 people into the host community, said Sterling.

Cooper said Pain Court is an ideal location because there will be very little needed to invest in infrastructure to make the venue viable to comfortable host the expected crowds.

“We don’t have to put a lot of dollars in getting hydro lines out there or truck water there, we’ve got it all there,” said Cooper. “And it’s 10 minutes to Chatham so that’s a big draw there for people. Being so close too off the 401 and close to shopping and tourism sites.”

Sterling said winning the bid to host the IPM in 2018 is only the beginning.

The association will now strike up an executive committee to plan the event and organize the 1,500 volunteers that will be required for the actual event.

The team will also be tapping into the experience of Elgin County who hosted the IPM in 2010 and the parent sponsor The Ontario Farmers Association.

“They work with every local committee year after year,” said Sterling. “We certainly anticipate some guidance from them in terms of where to get some sponsorship to start us up.”

Sterling is optimistic that Chatham-Kent’s proximity to the United States could also see a rise in attendance from Americans.

In order to qualify for the IPM competitors need to earn enough points at local plowing matches.

“When Elgin County hosted the IMP in 2010 they had the largest participation at their county event that they’d ever had,” said Sterling. “We anticipate getting more people (at the Chatham-Kent Plowing Match) for that reason.”

The IPM isn’t just about competitors, said Sterling. There are a number of people who come to the event yearly regardless of where it is hosted in Ontario just to socialize and keep up-to-date with the latest technology displayed by exhibitors.

“This will be good, not only for economic development, but for tourism and a lot of economic partners,” said Cooper. “This is going to take total community support.”