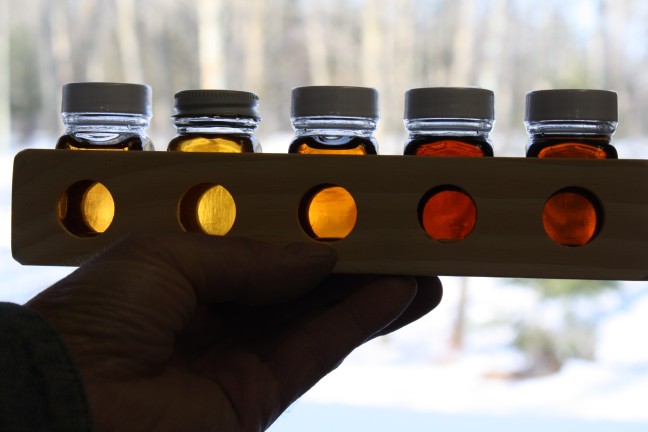 From FCC Express, by Christina Franc

A new grading system is being implemented across the maple syrup sector.

The International Maple Syrup Institute is working to provide better clarity to consumers when purchasing maple syrup. It says rather than simply selecting a letter or number grade, consumers will be able to choose from “golden maple syrup with a delicate taste,” “very dark maple syrup with a strong taste” and other similar descriptions.

The State of Vermont is jumping on board this season to implement the new system, and the institute expects other regions won’t be far behind.

Currently, both Ontario and Quebec are waiting for the system to be implemented by the Canadian Food Inspection Agency, anticipated to be completed in the 2014-2015 year.

There will only be two grades: Grade A and a processing grade. Grade A will be any colour and will be available for retail sale, whereas the processing grade will not be available in the retail market. Other requirements include how the maple syrup will be produced and the Brix, or sugar concentration, level.

The original grading system was useful when maple syrup was used as a substitute for sugar. However, consumers these days are more interested in flavour, and it’s expected that these new terms will help simplify the buying decision.

The system is also expected to facilitate trade in world markets and allow consumers to make better choices when selecting maple syrup.

Paul Rouillard, deputy director of the fédération des producteurs acéricoles du Québec says he has no concern about the transition for producers because they are already aware of the situation.