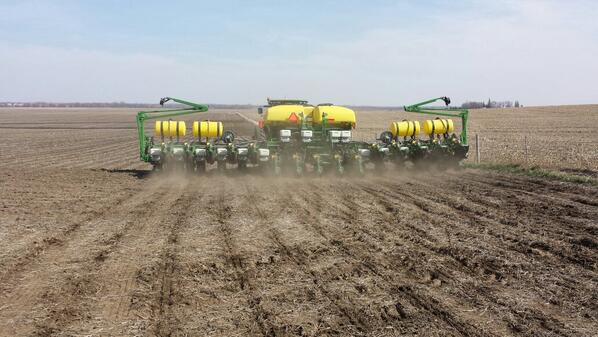 Cool spring temperatures have set planting back significantly in Ontario, while the harsh winter has left winter wheat producers wondering about thousands of acres of their crop.

Dale Cowan, senior agronomist with Agris Co-operative and Wanstead Farmers’ Co-operative, says as of midweek, no more than five per cent of Ontario’s two-million-acre corn crop was planted. That’s behind schedule; usually more than half the crop is planted by this time.

The same goes for soybeans, which are expected to reach a record three million acres in production this year. Only a few fields have been planted, but usually one-third to half of the seed would be in the ground.

Soil temperature is a major factor in these planting decisions. It should be above 10 C, which can occur as early as the third week of April. But this year, with the cool spring, it’s only reaching those temperatures now.

And while all of this sounds ominous, Cowan isn’t suggesting a change to early maturing varieties yet.

“I wouldn’t worry about switching hybrids until we see how the weather develops through the end of May,” he says.

As well, he notes, planting that used to take a couple of weeks can now be reduced to half that time, thanks to modern technology. So although farmers have to move fast to get planting done, they have the tools to do it. Such intense activity puts what Cowan calls a “tremendous strain” on the supply chain, but he adds that the delayed spring gave suppliers extra time to prepare.

The delayed spring -– or more correctly, the extremely long winter — wasn’t so kind on the winter wheat fields, however. Cowan predicts 20 per cent of the crop either has been ripped up, or will be, because it overwintered poorly.

“Even good fields have 10 to 15 per cent of their acreage missing,” he says.

On the bright side, Ontario experienced a mini heat wave during the early part of the week, creating hope for increased soil temperatures. However, the heat was accompanied by heavy rain in many parts of the province, making some fields wet and tough to access.