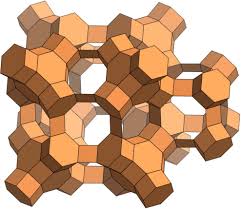 Using one of the largest supercomputers in the world, a team of researchers led by the University of Minnesota has identified potential materials that could improve the production of ethanol and petroleum products. The discovery could lead to major efficiencies and cost savings in these industries.

The University of Minnesota has two patents pending on the research and hopes to license these technologies. The study was published in the research journal Nature Communications.

Petrochemical and biofuel refineries use materials called zeolites that act as molecular sieves to sort, filter, and trap chemical compounds, as well as catalyze chemical reactions necessary to produce and upgrade fuel and chemical feedstock from petroleum-based and renewable resources. There are more than 200 known zeolites and hundreds of thousands predicted zeolite variations. The key to improving biofuel and petrochemical processes is to find which zeolites work best.

Unfortunately, synthesizing novel zeolites in the lab is a long, complicated process that can take many months each. To analyze all the known and predicted structures would take decades. Instead, researchers from the University of Minnesota and Rice University developed a complex computational screening process that can look at thousands of zeolites in the virtual world and identify their performance for specific applications. This reduces the need for trial and error experimentation in the lab.

“Using a supercomputer at Argonne National Laboratory, we are able to use our computer simulations to compress decades of research in the lab into a total of about a day’s worth of computing,” said lead researcher Ilja Siepmann, a University of Minnesota chemistry professor and director of the U.S. Department of Energy-funded Nanoporous Materials Genome Center based in Minnesota.

Predicting the zeolites’ performance required serious computing power, efficient computer algorithms, and accurate descriptions of the molecular interactions. The team’s software can utilize Mira, a supercomputer with nearly 800,000 processors, to run in a day the equivalent computations requiring about 10 million hours on a single-processor computer. The computations identified zeolites to attack two complex problems.

The first problem researchers tackled is the current multi-step ethanol purification process encountered in biofuel production. One of the last steps involves the separation of ethanol from water. Researchers found a few all-silica zeolites with superior performance that contain pores and channels with the ability to accommodate ethanol molecules but to shun hydrogen bonding with water molecules. One of these zeolites, which was synthesized and tested in University of Minnesota chemical engineering and materials science professor Michael Tsapatsis’ lab, was found to be so effective that it could change the ethanol/water separation process from a multi-step distillation process to a single-step adsorptive process. Similar zeolitic materials could also have possible applications for separations in the biofuels and petrochemical industry.

The second problem researchers examined targets the upgrading of petroleum compounds into higher-value lubricant and diesel products. They identified zeolite frameworks that could improve the dewaxing process of transforming linear long-chain into slightly branched hydrocarbon molecules, called alkanes, which affect the pour point and viscosity of lubricants and other petroleum products. Researchers say, defining appropriate sorbents and catalysts for all of the complex mixtures involved in creating these products is of “paramount importance,” but has been one of the most difficult problems to overcome.

“We’re looking for materials that have interesting properties and that’s what we’ve achieved here,” said paper co-author Michael Deem, chair of Rice University’s Department of Bioengineering and a professor of physics and astronomy.