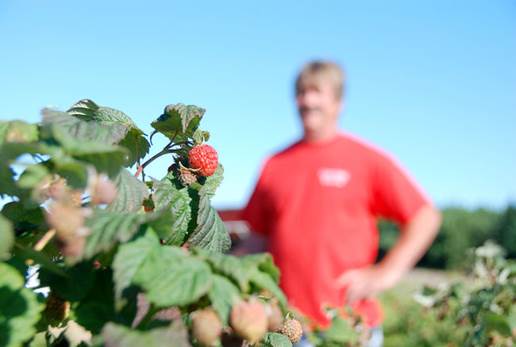 Agriculture is one of those areas where we all can learn some new facts, and if you want to learn more, like I have with these facts below, check out Farm & Food Care Ontario’s facts on farming at www.realdirtonfarming.ca

Traditionally, strawberry season has lasted only a few weeks in June. Berry farms are now growing day-neutral (ever-bearing) strawberries, which means we can now get them from May until October.

Organic foods are those grown or produced without the use of synthetic (or man-made) fertilizers and pesticides, genetically modified organisms (GMO’s), growth hormones, or medications such as antibiotics.

For livestock farmers, their priority is to provide the best environment that they can for the animals in their care. It’s trying to balance animal needs, safe food, and environmental and economic realities, but they are continuously investing in animal welfare research to help them learn what is best. Today’s farm practices are a combination of practical experience, common sense, and good science.

Gluten is a protein that is found in wheat, barley, rye, triticale, and foods made with these grains. Gluten must be avoided by about 1% of Canadians who have Celiac disease, and about 5% of Canadians with gluten intolerance, or 1% of us who have wheat allergy. Otherwise, despite much media hype, gluten is not problematic for the rest of the population. Products which are labelled “gluten-free” are not any healthier; they are just made with alternative ingredients that don’t include gluten.

Every one of us can take an active role in preventing disease and helping keep our animals and crops healthy. This means following government rules against bringing agricultural products such as plants, soils, or meats into Canada from other countries. Strange bugs and diseases could destroy our crops or our animals.

Animal feed plays a key role in recycling. The ethanol industry uses corn as its main ingredient. During the ethanol production process, starch is removed from corn, leaving behind a product called dried distillers’ grain (DDG) that has increased concentrations of other nutrients like fiber, protein, fat, and minerals. It is an excellent feed ingredient, and feed manufacturers are now using it in pig and cattle diets.

In Canada, only 9% of farms use any form of irrigation. The remaining 91% of farms rely solely on precipitation for crop watering. Irrigation is mainly used on higher quality crops such as berries, fruits and vegetables that are for direct human consumption.

Farmers, like all animal owners, must follow laws for the humane treatment of animals. In addition to these laws, farmers have helped develop the “Codes of Practice for the Care and Handling of Farm Animals,” in conjunction with animal scientists, government, veterinarians, industry partners, and the Canadian Federation of Humane Societies (CFHS). The Codes, which are internationally recognized as models of responsible animal care, spell out what is appropriate in the daily care and handling of livestock and poultry.

Here in Chatham-Kent ‘We Grow for the World’. Check out: www.wegrowfortheworld.com