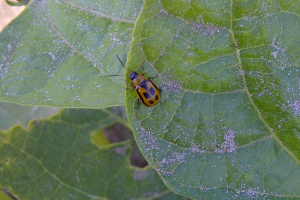 From ONvegetables in The Grower, December 2014

Biology
Bean leaf beetles over-winter as adults in grassy fencerows, leaf litter and wooded areas. They emerge in late-April and may be found feeding in alfalfa fields. Early snap bean fields planted close to alfalfa are at the greatest risk of bean leaf beetle damage.

The over-wintering female beetles lay clusters of lemon-shaped, bright orange eggs at the base of the bean plant. Egg-laying continues until late June. Larvae feed on roots and soil debris for approximately 30 days prior to pupating. First generation adults emerge in mid-to-late-July. This generation lives for approximately 1 month. A second generation of adults emerges mid-to-late August and feeds until it runs out of a food source, either due to harvest activities, crop senescence or cold fall temperatures, and the adults migrate to their over-wintering sites.

Scouting Notes
These pests often feed in clusters. Examine 1m of row at each of 10 locations across the field. Select a wide range of field locations, including border areas.

Thresholds
Apply a control if beetles exceed 1 beetle per foot of row or if defoliation exceeds 25%. Defoliation prior to bloom does not have as strong an impact on yield. Early season bean leaf beetle populations may be adequately controlled by systemic insecticide seed treatments used to control potato leafhopper.

Tolerances in snap beans will be significantly lower after pod-set if the beetles are feeding on the pods or where they may become potential contaminants for the processor.

Management Notes
Consider using border sprays to control the beetles as they move out of the fencerow. Consult the Ontario Vegetable Crop Protection Guide (OMAFRA publication 838) for a list of registered foliar and seed treatments.