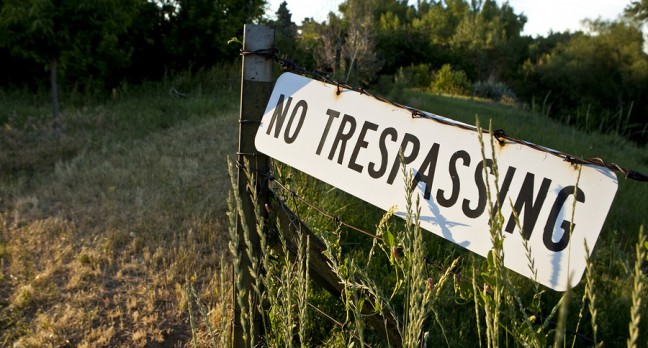 The Ontario government just introduced new legislation that would protect and improve thousands of kilometres of trails throughout the province. But Bill 100, the proposed Supporting Ontario’s Trails Act, is missing the mark on protecting private farmland where it meets public trails.

Nearly 20,000 kilometres of trails in Ontario run through municipalities, including trails along farmland. That’s about a quarter of the entire trail network, and it’s also where trespassing concerns arise. Bill 100 includes amendments to a number of other statutes, including the Trespass to Property Act – a piece of legislation the Ontario Federation of Agriculture has been pushing for updates to since 2005.

The OFA wants the government to take a much tougher stance on trespassers on farmland, including bigger penalties. We’ve reviewed the proposed Bill 100 and will be advising policymakers on how to minimize the potential conflict between farm property owners and rural trail users. As it currently reads, Bill 100 does not address OFA recommendations that would protect the rights of landowners.

We need real amendments to the Trespass to Property Act as part of Bill 100. We have already been pushing for two key amendments – that don’t appear to have made it into the new Act. We want a minimum fine of $500 imposed for trespassing, and broader police enforcement of the Act to address farm safety and biosecurity concerns related to trespassing.

As Ontario trails become more popular we need more clarity on the obligations for fencing sections of trails that intersect with private farmland. We can’t leave this to chance.

At first look, Bill 100 appears to do a great job to promote an extensive trail system across Ontario that promotes a healthy lifestyle. But we can’t let the government forget what Ontario agriculture needs to protect the private farmland that shares space with Ontario’s nature trails.

If public trails run along or through your farm property, review Bill 100 to understand the implications this new legislation may have on your farmland. A full copy of the proposed Supporting Ontario’s Trails Act is posted on the Ontario government’s legislation site at www.ontla.on.ca

Trails through rural Ontario attract thousands of visitors every year. The OFA is committed to work together with government to improve and expand Ontario trails, while respecting the rights of Ontario farmers and their land.

« Local Food Week June 1 – 7, 2015 Canada Must Open Up Its Agriculture Sector If It Wants To Be Part Of A Major, 12-Country, Free-Trade Deal-Washington Says »