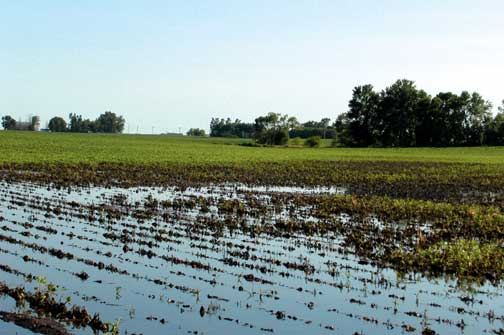 From FCC Express, By Owen Roberts

Spring planting got off to a superb start in most of Ontario. But now, many corn and soybean fields in the extreme southwest area are sopping wet, with no relief in sight.

Over the past two weeks, as much as 150 millimetres more rain than normal has fallen in Essex County and Kent County.

That’s about twice as much as farmers there would expect.

Dale Cowan, senior agronomist with AGRIS and Wanstead Cooperatives, says wet field conditions have kept an estimated 15 to 20 per cent of soybean fields from being planted in Essex County.

And dire warnings call for significantly more rain on the way on the weekend, moving north through the Mississippi valley.

“My concern is with what’s yet to come,” Cowan says. “In some areas, there’s been no reprieve.”

Cowan says at least a week or more of dry weather is needed to make many fields passable.

“We have a time constraint here,” Cowan says. But given the forecast, he acknowledges ideal conditions are a long shot.

Even if meteorologists are wrong, the rain has already created management problems.

First, many producers have been unable to get onto their fields to sidedress nitrogen. That situation is certain to reduce yield if the rain doesn’t let up and farmers are held back from delivering nitrogen applications, says Cowan. He suggests soil tests for farmers concerned about nitrogen levels, and perhaps alternative nitrogen strategies, such as broadcasting over top the crop, rather than injection.

Another problem is weed control. Producers who didn’t do a burn down of weeds early were caught off guard when the crop came out of the ground fast. Now, they’re dealing with nasty weed infestations, especially herbicide-resistant Canada fleabane that Cowan estimates is found in five to 10 per cent of southwestern Ontario fields. Control options are very limited, he says. Only First Rate (a Group II herbicide) is recommended.

Overall, Cowan isn’t ready to signal a crop failure yet. But he is concerned.

“A lot will depend on how farmers manage the situation,” Cowan says. “The amount of rain that falls in the next week will be critical for this year’s crops.”