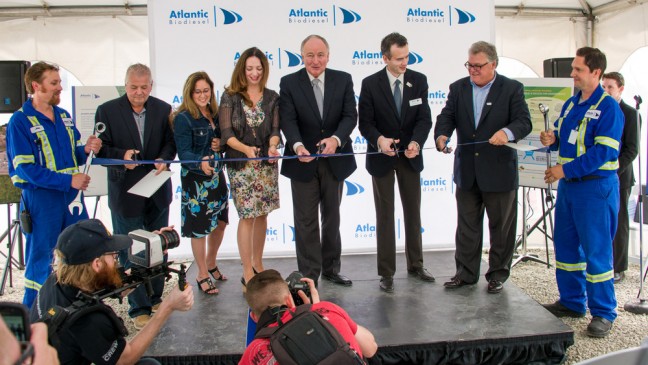 From Biodiesel Magazine, by Ron Kotrba

“This is an important day for Atlantic Biodiesel and for the greater Welland community,” said Michael Paszti, chief operating officer of Atlantic Biodiesel. “Our world-class facility is up and running. We are excited to be a part of this community and to support the local economy.” Paszti said the company is making a commitment to source locally when possible.

In addition to 45 MMgy of biodiesel production, the plant is capable of making 4 MMgy of high-grade glycerin and is strategically located within close proximity of rail infrastructure, providing for storage and shipping ability to a range of North American markets.

“The City of Welland is thrilled to welcome Atlantic Biodiesel to the community,” said Mayor Frank Campion. “The facility will bring approximately 25 direct jobs and significant indirect business to the area. Every job is valued and needed in our community. I strongly encourage the federal, provincial and local governments to join me in supporting this local company as they work to bring jobs and economic prosperity to Welland.”

“Tomorrow the real work begins,” Paszti said. “We are committed to the long-term sustainability and success of our facility and we are proud to be part of Welland’s economic renewal.”

Atlantic Biodiesel is a member of the Canadian Renewable Fuels Association. Andrea Kent, president of CRFA, said, “The opening of Atlantic Biodiesel’s facility is great news for Welland and Ontario. We salute Atlantic Biodiesel’s new leadership team for their long-term commitment to biofuels and to local and national economic prosperity. They represent a fantastic and welcome addition to our membership.”