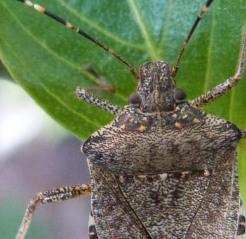 We have been actively monitoring for BMSB since 2011. As of June 2015, we have confirmed BMSB has established (breeding) populations at 5 locations in Ontario, but based on trap captures of adults and homeowner finds, we suspect a much wider distribution. Most BMSB in Ontario have been found by homeowners, and in some locations, multiple reports indicate that local populations have been established. There have been almost 300 confirmed BMSB homeowner finds in Ontario to date!

Research A three-year project “Sustainable Management and Survey for Brown Marmorated Stink Bug in Ontario” is being funded through the OMAFRA/ University of Guelph Partnership Program (2015-2018). Cynthia Scott-Dupree (U of G) is the project lead. An evaluation of native natural enemies and their potential for reducing BMSB populations is being conducted by Tara Gariepy, Agriculture and Agri-Food Canada, London, ON. Monitoring & management The brown marmorated stink bug (BMSB) is a relatively new pest, and we are still learning about its biology and how to control it. Thresholds and management programs are still being developed in the US, in areas where BMSB is abundant1. Scouting is always important, on both the crop and on nearby landscape hosts. Buckthorn, Catalpa, pin cherry, honeysuckle, lilac, Manitoba maple, black walnut, Tree of Heaven, wild grape are some of the landscape hosts that support development, but there are many others. BMSB females will often lay their eggs on hosts in unmanaged areas, allowing their numbers to build up. Woodlands are reservoirs for dispersal to agricultural crops. What triggers movement through the season from wild hosts to crops is still being studied, but it is most likely a function of population density, temperature / humidity levels, changing resource quality and/or nutritional needs of the bugs. Some recent work indicates that despite being a generalist feeder, BMSB prefer ripening fruit and track it in the landscape over time2. It’s quite likely that BMSB behavior and associated crop risk with vary considerably across Ontario as a function of landscape / food resources available through the season. BMSB adults and nymphs are quite mobile (not to mention great at hiding), and may be difficult to spot in the field, especially when numbers are low. Low numbers of BMSB observed when scouting may still equate to economic injury as populations increase, particularly during very dry years. Make sure to look for signs of stink bug injury, especially along crop borders near woodlots, hedgerows, the Escarpment, etc. Early injury in tree fruit looks like water spots or small areas of bleeding, becoming depressed or sunken as fruit develops (‘catfacing’). Under the skin, the tissue takes on a corky appearance. In apples, injury may take 2-3 weeks before it is obvious. Because stink bugs are often present in numbers, and because they will make multiple punctures with their mouthparts, a single fruit or vegetable may have many points of injury. One BMSB can injury many fruits / vegetables over the course of its development. More descriptions and pictures are available on our webpages at www.ontario.ca/stinkbug.

Pheromone traps are being recommended for use as early detection tools, to trigger intensive scouting in crops and to time insecticide applications. There are several models available, but almost all of them include some form of pyramid to direct the movement of the bugs and a collection container to trap and hold them. Traps are loaded with an attractant (“COMB” a combination of BMSB aggregation pheromone plus MDT, the aggregation pheromone of a related stink bug) and an insecticide strip to kill bugs and help prevent them from escaping. There are various suppliers/ types of pheromone lures; each has different performance characteristics and longevity. Traps should be placed in the field from May through harvest. Finds of adults in traps are indicative that BMSB are established in the area but they do not always mean insecticide sprays are necessary. Adult BMSB are often on the move, and so finding them in traps does not mean they are not simply on their way to some “better place”. In contrast, the nymphs are resident pests and if present, they will continue feeding causing injury for a long time. Pest pressure is typically highest on the edges of fields. For this reason, traps are typically placed between crop borders and woody landscape hosts OR within the crop border. Since traps are not very efficient in capturing all BMSB they attract into the area, visual observation on the vegetation around the trap is also helpful in detection. If adults or nymphs are found in traps outside of the crop, intensive monitoring is needed. If nymphs are found in traps placed within a crop border, sprays are triggered. In tree fruit, the presence of adults or nymphs in the crop itself is enough to trigger an insecticide spray. Detailed recommendations are not yet available for all hort crops, but some useful tips are found athttp://www.stopbmsb.org/managing-bmsb/management-overview/. Pheromone traps are not a substitute for monitoring your crops. Use visual surveys, tapping trays and sweep nets, as appropriate for routine scouting activities. Pay special attention to blocks where neighbouring crops such as soybeans have been harvested; late season hort crops such as apples and grapes (after veraison) are at high risk from migrating adults. Don’t forget to check trees and woody shrubs along borders! Border sprays are sometimes sufficient for limiting damage, unless the pest has become established in the crop (keeping in mind BMSB may be difficult to spot – see above)3. Tolerance for damage is very low in tree fruit crops. Begin management with border sprays at first adult (in crop) find, or whole orchard sprays with first nymph find prior to 1 August. The majority of late season injury appears to occur within the first 30 m of wooded edges. Keep in mind that sprays will only control those BMSB that are present at the time of application, or shortly thereafter, and nymphs are easier to kill than adults. Residual activity is typically limited. New waves of adults can migrate into crops from adjacent areas through the season. You will need to keep monitoring your crops. Managing BMSB requires your season-long attention. Unfortunately, many of the products available for managing other crop pests are not effective against BMSB, requiring a shift in IPM programs. For a list of products registered for use in Canada see:http://www.omafra.gov.on.ca/english/crops/insects/bmsb-registrations.htm If you think you have found BMSB on your farm, contact us! Take a picture, collect some samples, and contact OMAFRA’s Agricultural Information Contact Centre at 1-877-424-1300 or ag.info.omafra@ontario.ca. 1 Input provided by Dr. Greg and Krawczyk, Department of Entomology, Fruit Research and Extension Center, Pennsylvania State University, Peter J. Jentsch, Department of Entomology, Hudson Valley Laboratory, Cornell University, and Dr. Anne Nielsen, Rutgers University 2 Holly M. Martinson, P. Dilip Venugopal, Erik J. Bergmann, Paula M. Shrewsbury, Michael J. Raupp. 2015 “Fruit availability influences the seasonal abundance of invasive stink bugs in ornamental tree nurseries”. Journal of Pest Science June 25, 2015. 3 Weekly border sprays applied to the perimeter of peach blocks (not the surrounding trees) plus the first full row have been used successfully in New Jersey, resulting in a significant decrease in the amount of insecticide used while keeping damage equal to full block sprays. Research to evaluate this tactic in apple is still underway (Anne Nielsen, Rutgers University)