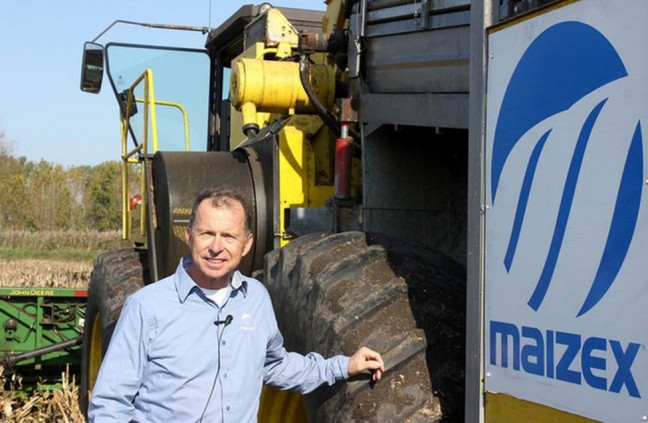 Back in August of 1985, Dave and Brenda Baute had a dream. They incorporated Maizex Seeds, initially producing commercial seed corn for export to the U.S. market as well as specialty corn for domestic food processors.

In 1997, Maizex Seeds began commercial sale of the seed corn it produced under its own Maizex brand. Today, they market corn through their distribution network across all the corn growing regions of Canada.

In 2014, Maizex Seeds added 8,200 sq. ft. to its finished goods warehouse, increased ear corn drying capacity by 25%, and more than doubled the harvest capacity to meet the growing demand for their seed.

Maizex Seeds has developed what they call “The Maizex Difference,” which highlights their commitment to quality and helps set them apart from their competition.

They start with the best genetics and finish with a seed that offers maximum health and vigour to ensure a uniform crop. From planting to harvest, from field to the bag, Maizex Seeds always strives for quality.

Seed corn is harvested on the ear, then husked and sorted in the field to reduce handling and any possible injury. Maizex Seeds corn is dried on the ear in their proprietary, single-pass driers. Their low temperature dryers reduce moisture gradients in the seed to preserve germination and vigour. After drying, the ears are shelled, sized, and graded.

I know Dave would want this article to be all about others and not himself, but Dave Baute is truly a humble man and gives credit to others who have helped influence his life. He grew up in the Baute family where his father instilled the value of hard work into his children. After college and university, he joined the King Grain sales team and eventually moved to the head office in Pain Court. Dave credits Paul Roy King, a good friend and mentor of many of us, with helping guide him on the right path towards starting a successful business.

Dave also has high regards for Dr. Francis Glenn, who always believed in Dave’s work. Dr. Glenn, a plant breeder from Blenheim, recently was awarded the prestigious 2015 Canadian Plant Breeding and Genetics Award from the Canadian Seed Trade Association (CSTA). Dr. Glenn believes Dave is a business innovator who can see a market and drive it forward in a logical and innovative way and has initiated many innovations that other companies now adopt.

Dave became involved with the CSTA at the beginning of his career and after thirty years of involvement with this great organization, recently completed his term as their president. He is also a long-time member of the Canadian Seed Growers’ Association and is chair of the Agri-Food Foundation, based at the University of Guelph’s Ridgetown Campus.

We offer our thanks and congratulations to Dave and Brenda Baute and the Maizex Seeds team for 30 amazing years. This is another example of a home grown Chatham-Kent company, which started with a dream and continues to keep growing.