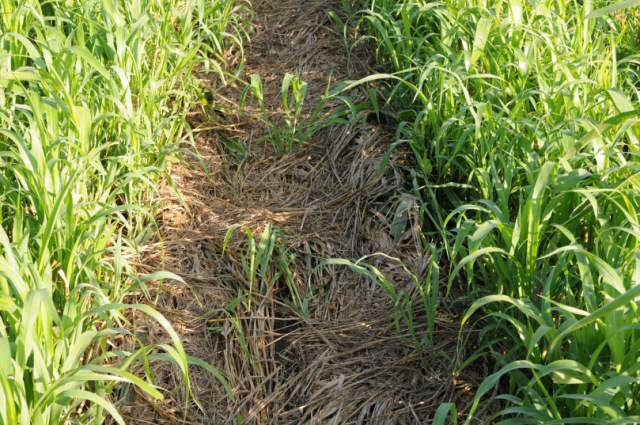 Managing the Warm Season Grasses – While it is too late to plant, there is still time to mow pearl millet or sorghum sudan if they are starting to get a bit tall. Check that the mower is set to cut above 6 to 8 inches to protect the growing point of the grass and to allow for a speedy regrowth. Adjust the mower to spread the plant residue as evenly as possible. Heavy windrows of plant residue will smother regrowth and make for an inconsistent stand, allowing weeds to invade. Cutting the millet or sorghum will keep the plant growing actively and will tend to result in residues that breakdown more readily. In addition, research from New York has suggested that the root system will get larger and in particular deeper, helping to reduce compaction.

Tips for Adjusting Seeding Rates in Cover Crop Mixes – There are a variety of cover crop mixes available commercially but you can also make your own. The challenge is to adjust the seeding rates to suit your location and timing. Sjoerd Duiker of Penn State University suggests, “Try to select species that complement each other, such as a legume with a grass or an upright versus viny cover crop. While we give standard seeding rates for sole plantings in the table, determining appropriate seeding rates of each species in a mixture can be difficult. As a starting point, divide the normal seeding rate of a species if planted alone by the number of species in the mix. Then make adjustments based on the competitiveness of each species. Certain species are highly competitive in a mix, including forage radish, canola, and oats. Seeding rates of these species must be reduced more to prevent them from dominating the mixture. Successful seeding rates for these species in mixtures are 2 to 3 lbs/acre for forage radish, 3 to 4 lbs/acre for canola, and 20 to 40 lbs/acre for oats. Legume components of a mixture, which tend to be weak competitors, are more safely kept towards their sole seeding rates to ensure establishment in the stand. If more than one highly competitive or poorly competitive species are included in a mix divide these recommended seeding rates by the number of species in that group. These are just starting points which need to be adjusted based on your preferences. The most important point right now is to get the seed and be ready to plant those covers immediately after harvest.”

Adjust seed rates for the degree of competitiveness of the various cover crop species. For example radish is highly competitive and seeding rates within a mix should be reduced to no more than 2-3 lbs/acre to allow the other parts of the mix to establish well.