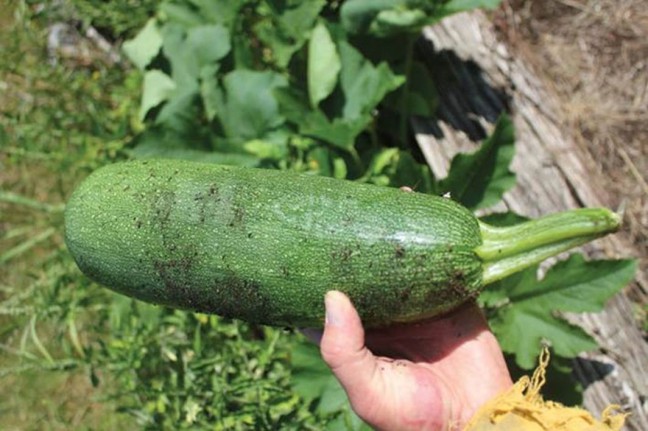 If you have a garden, chances are you are trying to give away your zucchini. Or if you have any friends with gardens, they are probably trying to give you lots of their zucchini. The season is upon us. We have zucchini coming out everywhere. You may have had your fill of zucchini already, but what do you really know about this crop?

Zucchini belongs to the botanical family Cucurbitaceae, which includes many familiar summer and winter squashes and gourds, such as yellow, crookneck, delicata and acorn squash, pumpkins, ornamental gourds, watermelon, and cucumbers.

In a culinary context, zucchini is treated as a vegetable, as it is usually cooked and presented as a vegetable dish. Botanically, zucchini are fruit, a type of botanical berry, being the swollen ovary of the zucchini flower. Zucchini, like all squash, has its ancestry in the Americas. However, the varieties of squash typically called “zucchini” were developed in Italy, many generations after their introduction from the Americas.

Zucchini is a great addition to any diet. It’s a good source of vitamins C, B6, riboflavin, vitamin A precursors, potassium, and manganese. It’s high in the carotenoid lutein, which is beneficial for eye health. It’s very low in carbohydrates. It’s a good choice for filling a plate without racking up high calorie levels, as there are only 15 food calories per 100 grams of fresh zucchini. However, if you eat too much zucchini, it can potentially lead to unpleasant gastrointestinal side effects. Besides being high in fiber, the carbohydrate content of zucchini changes under different storage conditions after it is harvested. Just like people, plants experience metabolic stress upon exposure to different environmental conditions.

Unlike cucumber, zucchini is usually served cooked. It can be prepared using a variety of cooking techniques, including steamed, boiled, grilled, stuffed, baked, barbecued, fried, or incorporated in other recipes such as soufflés. Zucchini can also be baked into a bread similar to banana bread or used in a cake mix. Its flowers can even be eaten, whether they are stuffed or used a delicacy when deep fried, such as tempura.

One way to make use of zucchini year round is by making it into jams, relishes and pickles, or simply blanching it and freezing it for winter. Dehydrating is another option, with crispy zucchini chips making a healthy snack. Zucchini can be used as a substitute for pasta, can be cooked into lasagna or omelettes, used as a pizza topping, or hollowed out and stuffed with almost anything from a mushroom mixture to cheese, meats, other vegetables or breadcrumb mixtures.

So, don’t just throw away that zucchini. Make your own recipe from this versatile crop.

Think about this – The storms that threaten to destroy us, God will use to strengthen us.