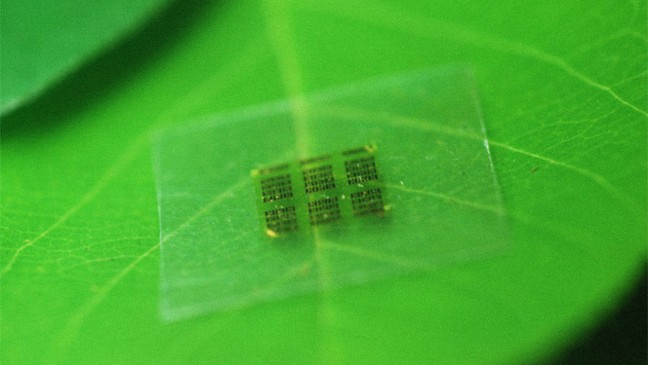 In our quest for the next new thing in gadgets, we throw away a lot of old electronics—millions of tons of the stuff. But now there may be a biodegradable alternative for at least one part of all those devices: the chip.

Researchers at University of Wisconsin have developed a chip made mostly from wood. And, what’s more, they claim it works as well as a silicon-based chip. According to MIT Technology Review:

In conventional chip manufacturing, electronic components like transistors are made on the surface of a rigid wafer made of a semiconducting material such as silicon. [The researchers] made the electronic components in a similar way but then used a rubber stamp to lift them from the wafer and transfer them to a new surface made of nanocellulose. This reduced the amount of semiconducting material used by a factor of up to 5,000, without sacrificing performance.

The design doesn’t replace the active components of the chips, which are still composed of gallium arsenide, a toxic substance. It does replace the larger base layer, swapping silicon for a very thin layer of cellulose, or wood. That means most of the chip would decompose on its own in nature.

“The majority of material in a chip is support. We only use less than a couple of micrometers for everything else,” says lead researcher Zhenqiang (Jack) Ma in a press release. “Now the chips are so safe you can put them in the forest and fungus will degrade it. They become as safe as fertilizer.”

Ma says the chip is ready for full production but says it’s currently more expensive than silicon-based chips, so would need extra environmental pressure, or a spike in rare metal prices, to become a reality. Maybe one day we’ll have to rename Silicon Valley Wood Valley, or, better still, Cellulose Valley?