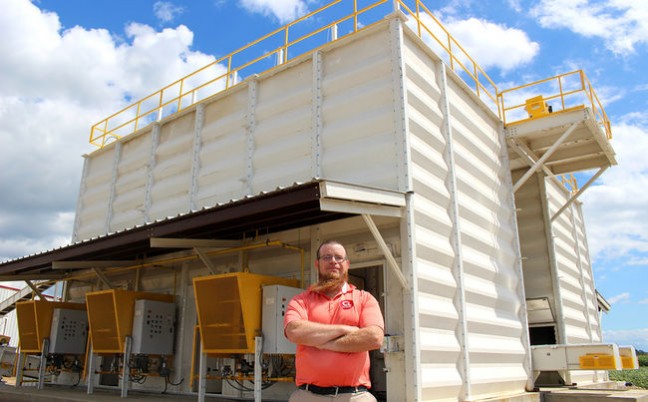 SHREWSBURY  – A “substantial” investment has been made by C & L Seed Production Group Inc. to efficiently serve the drying needs of seed corn companies no matter the size of their operation.

Chris White, a manager with C & L Seed Production – which is owned and operated by the Giffin and Stewart families – told The Chatham Daily News: “This is the first new seed corn dryer built in Canada . . . in probably close to a decade.”

He noted seed corn dryers are a specialty piece of equipment, adding most of the dryers that exist in Canada are tied to a retail brand of seed corn, so there are not a lot of independent dryers.

The new processing facility features modular technology that includes six separate drying bins that can be operated independently. It also has the ability to match the electricity and natural gas being used to the amount of corn being dried, which allows for tighter control of the amount of heat and fan intensity for the specific batch of corn being processed.

White said it came to the company’s attention that most of the new seed corn dryers constructed in North America are built for large volumes.

“There was a niche in the retail seed corn market, both in Canada and the (United) States, for people that wanted smaller lots (dried),” White said.

He added this can include companies with smaller brands of seed corn or a company introducing a new variety.

White said the company is also nearing completion of having the facility certified organic.

Not only has the seed corn industry done studies to determine there is increased demand for dryer space in the North American market, White said C & L’s own industry contacts indicated “if this existed, we would buy it.”

He added the company expects it will be serving U.S. customers and has the potential to tap into overseas markets.

Lee Giffin, an owner of the company with his father Lyle Giffin, said the process has gone smoothly to construct the new facility, adding both families have been involved since Day 1. The Stewart family include brothers Chris, Craig and Dale.

Giffin sees “great potential” for the new facility, noting southwestern Ontario is a key area of the world for seed corn so “if you’ve got a drying facility you’ve got a good chance that you can run a very successful business.”

The facility has the capacity for 500 acres of seed corn.

White doesn’t expect capacity will be reached this first season, but added, “I think the way things are going and the interest we have, we’ll be at full capacity for 2016.”

The company has planned for expansion.

“The whole system is set up so that we can expand the dryer three times before we have to touch any of the infrastructure,” Giffin said.

Lyle Giffin, who has been farming for more than 60 years and has more than 40 years experience in the seed corn business, said the project has been in the works since November of 2013 before construction began in the early spring.

“It’s been a long haul,” he said, adding the project has progressed well.

While he never imagined the company growing to this size, Lyle Giffin said, “you have to be able to keep up with the times so, as a result, if you don’t progress, you don’t go ahead.”

There has already been a positive economic impact from the project White said, noting local companies and tradespeople were hired for the construction.

He added there will be full-time jobs created as the facility gets up to capacity.