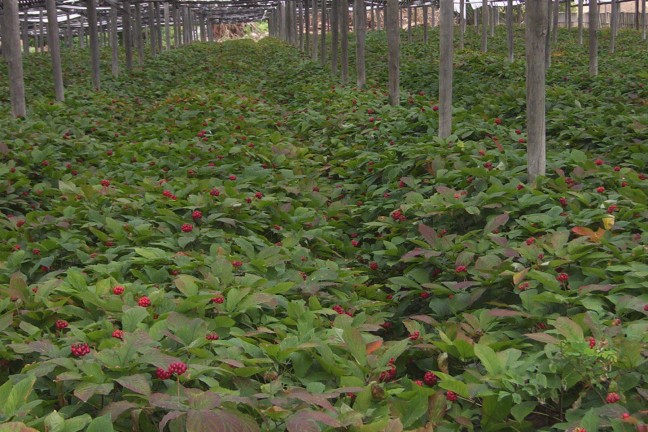 From FCC Express, By Owen Roberts

Many months have passed since a heavy spring frost stung Ontario ginseng growers, but its residual effects are expected to linger through to next year.

The May 23 frost damaged some two-year-old ginseng plants, leaving them weakened and ultimately with kinked, crimped stems. That’s caused by the head of the plant literally falling over from the weakened stem.

Seeing up to five kinks in the stem is not unusual this year, says Sean Westerveld, ginseng and medicinal herbs specialist for the Ontario Ministry of Agriculture, Food and Rural Affairs.

Weakened plants are vulnerable to some foliar diseases, particularly alternaria leaf and stem blight and botrytis blight. The diseases showed up after the frost and growers battled them through the first half of the season. Westerveld says they are mostly under control now.

Alternaria leaf and stem blight and botrytis blight can affect established plants as well. Even one lesion can affect production. And the longer the plants are in the ground, the more likely disease will affect them.

However Westerveld says overall quality this year will be fine. No unusual root diseases are being seen. Quantity may be affected somewhat, but the frost damage from the spring will mostly be felt on next year’s harvest.

Here’s why: Ginseng is harvested after three or four years of growth. This year’s two-year-old plants are set to be productive starting next year, but the frost damage could impair their abilities.

As well, many plants being grown for seed were damaged by the frost.

“That could have an impact on the amount of seeds available for planting next year,” Westerveld says. “It could be challenging.”

Demand is not expected to decrease. Westerveld says Ontario acreage this year is up incrementally, standing at about 6,500 acres.

Ginseng prices are doing well, having continued a steady recovery that sees them now enjoying a 20-year high. Demand in China has increased, while supply has been limited following the exit from the industry by many British Columbia growers following low prices, and crop issues elsewhere that limited supply.