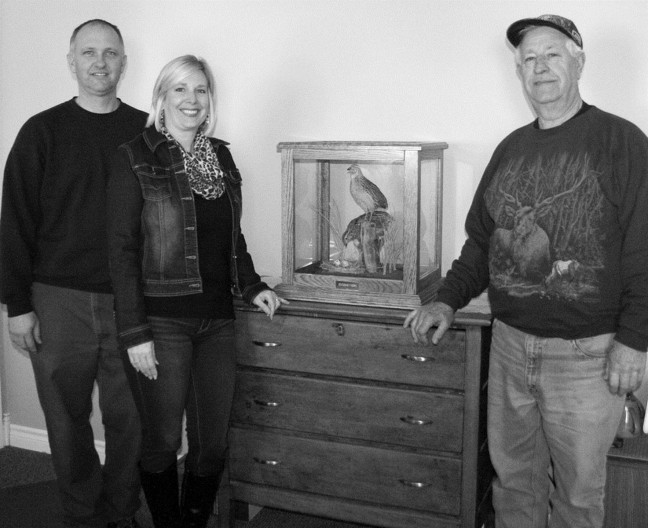 Written by the Ridgetown Independent.

Scot and Cheryl Ryckman, owners of Nipissing Game Farm Inc. of Muirkirk have worked hard to realize their dream and now have a flourishing business in Orford Township.

Ten years ago after the birth of their daughter Shelby, Scot and Cheryl were ready for a change in careers. They had been raising ducks as a hobby and someone suggested they raise quail. After Scot did a great deal of research, breeding stock was ordered from Quebec, the farm was purchased and the chicken barns that were on the farm were changed over to quail. “We had our first shipment ready to go and the guy (purchaser) said ‘I don’t want them’,” related Cheryl. After some scrambling someone suggested they call Nipissing Game Farm in Callander, Ontario. The Ryckmans contacted them and they were able to take their birds.

The Ryckmans began building their own processing plant at their farm in December 2013. In December 2014 the Ryckmans closed the processing plant they had bought in Callander and started processing on their farm in November 2014. “We do everything on this farm, start to finish,” explained Cheryl. “It’s easier on the birds, we don’t have high transportation costs. We used to have to feed them for an extra week and a half to get them to the right size because they would lose weight on the trip up (to Callander), so we had higher labour costs.” Scot also had to make the 5 1/2 hour trip to Callander every other week.

The hatchery, where they raise Coturnix Quail, and processing plant are Federally inspected. The hatchery is inspected every three months, plus an annual inspection. “This plant doesn’t run without an inspector or vet on the line,” stated Cheryl. “We can’t run without them. There are supposed to be two (inspectors) here at all times.” “Every bird is inspected,” said Jim Devine, Cheryl’s father, who has two pens of quail on his farm in addition to the six pens that are at the Ryckman’s farm.

The quail eggs are in the incubator for 14 days, in the hatcher itself for three days and then they are raised in the barn for 5 1/2 weeks. About 40,000 eggs are hatched every week and every week 40,000 quail are processed. The farm has approximately 20,000 breeding stock. “We want to be processing 50,000 a week,” said Cheryl.

The Ryckmans employ 30 full time staff in the processing plant and five in the barns. Cheryl’s job is accounts payable, accounts receivable, payroll and all shipping paperwork including export documents. Scot oversees the whole operation, processing plant as well as the farm. He also works closely with the sales department.
The birds are sold mainly to wholesalers and because they are federally inspected they can be sold anywhere in the world but are concentrating on Canada and the U.S. They have had enquiries for container loads overseas and have the freezer space and capabilities to do that but “we have so many customers in Canada and the U.S. we are trying to keep up with that right now”. Eighty percent of their product goes into the U.S. “We are the only quail producer in Ontario for meat birds. There is one in Quebec, one in B.C. and two in the states,” said Cheryl.

With different ethnic cultures immigrating to Canada there is a huge market for quail and the demand is growing. All of the birds are done Halal. There is a Muslim, Hasan Taweel, on staff, “he slaughters and blesses every bird. The halal market is 95% of our business,” stated Cheryl. Halal is an Arabic word that means “permissible”. In terms of food, it means food is permissible according to Islamic law. The slaughter of a halal animal is called “zabihah” and there are certain guidelines to follow, such as – Allah’s (God’s) name must be pronounced during the slaughter, the instrument must be very sharp to ensure humane slaughter and the animal must be slit at the throat. The animal must not be unconscious, must be hung upside down and allowed to bleed dry. Eating blood is not halal. These steps must be accomplished by a Muslim or People of the Book (Muslims, Christians and Jews). The animal must have been fed a natural diet that did not contain animal by-products.

The goal is to get production on the farm up so that 50,000 to 60,000 quail are being processed per week. When employees are fully trained, with one line they could do almost 12,000 quail per day. Right now they are doing 23 birds per minute and are aiming for 26. Three customers take the quail fresh and the rest goes out frozen.

The building not only holds the processing plant and office but staff lunch room, lockers, change rooms, showers, washrooms, office for the CFIA (Canadian Food Inspection Agency), a large freezer (which could hold six weeks of production) and a special prayer room for Hasan.

They have the ability, using a HACCP (Hazard Analysis and Critical Control Points) code, to trace back from the HACCP number and know when the egg was laid.

The Ryckmans are committed to promoting and educating consumers about the benefits of eating quail. They have built a first class facility and have trained staff to enable them to provide people with a high quality product for years to come.

Printed By the Ridgetown Independent

The Nipissing Game Farm Inc. has recently opened their processing facilities near Muirkirk. The plant is modern and clean and owners Scot and Cheryl Ryckman are very proud of their operation. They process 40,000 quail per week and are working at increasing that to between 50,000 and 60,000. The quail farm is the only one of its kind in Ontario for meat birds.

This huge freezer on Nipissing Game Farm near Muirkirk shows several pallets of quail all set to go to the purchaser. The freezer is capable of holding up to six weeks worth of production. Three customers take the quail fresh and the rest goes out frozen.

Nipissing Game Farm employee Ralph Burton is pictured above wrapping and labelling the frozen quail prior to shipping. The farm ships 40,000 quail per week to market with 80% going to the U.S. market. All the birds are done Halal. Hasan, a Muslim, slaughters and blesses every bird. The halal market is 95% of their business

Pictured at left are Scot and Cheryl Ryckman, owners of Nipissing Game Farm near Muirkirk and at right is Cheryl’s father Jim Devine. Together they hatch, raise, process and ship 40,000 quail per week on their farm. In November 2014 they started processing the quail in their new, federally inspected, processing plant. They have 35 employees and right now are processing 23 birds per minute with a goal of 26 per minute.