This Stink Bug Is On Your Side 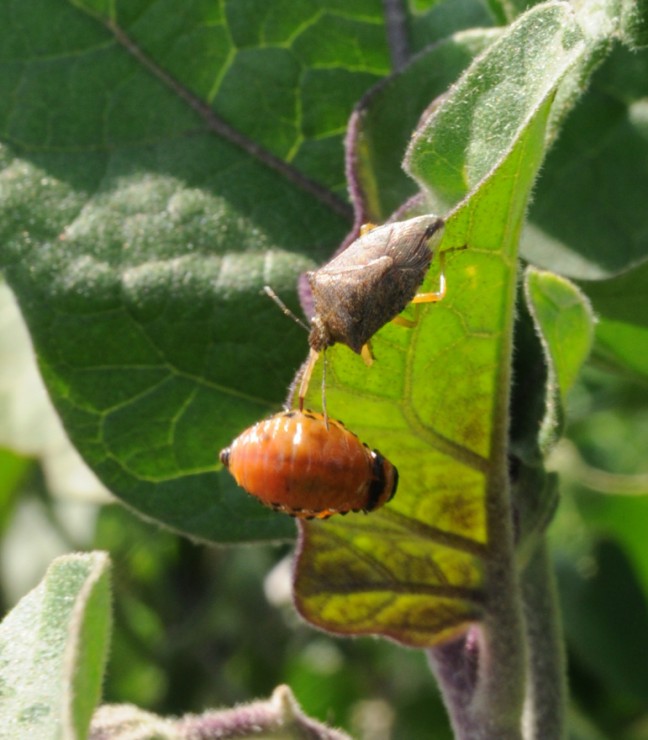 This Stink Bug Is On Your Side

We talk a lot about the stink bugs that damage crops: brown stink bugs, green stink bugs, and the new invader with the long name, the brown marmorated stink bug. It’s great to be reminded sometimes that there are good bugs out there, too.

I recently noticed a Colorado potato beetle larvae dangling from an eggplant leaf. On closer inspection, I discovered why.

It was being fed on by a predatory stink bug.

It can be difficult to tell the various brown-coloured stink bugs apart, but there are two good ways to tell if a stink bug is a plant-feeder (not your friend) or an insect feeder (a friend who eats insect pests for you). The first way to tell: if the stink bug has it’s mouthpart (beak) stabbed into another insect. Then you can be assured that it is a predatory stink bug. If you happen to catch one between meals, then you will need to turn it over and look at its beak, which is usually folded up against its “chest”. If it has a thick beak — good for stabbing and drinking insect smoothies — then it’s a beneficial predatory stink bug. If it has a thin beak (as thin or thinner than the antennae), this indicates a plant-feeding stink bug — a pest. There’s a good photo comparison of stink bug beaks here on the North Carolina State University website.

Notice the thickness of the beak in the two photos below.

So when scouting your fields, if you see a stink bug, now you can distinguish friend from foe.