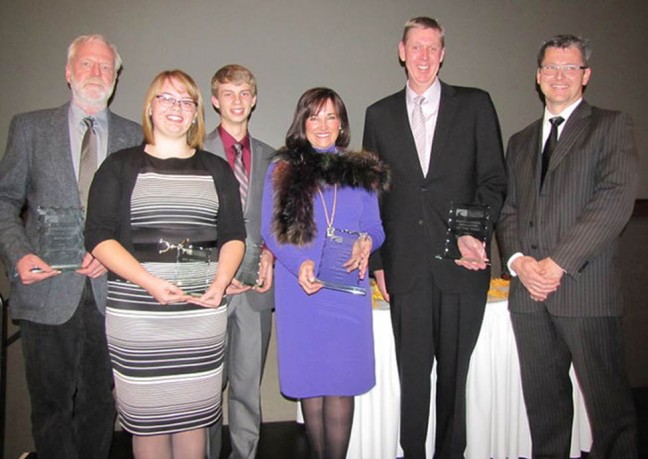 The 69th annual Chatham-Kent Chamber of Commerce Rural Urban Awards Dinner took place at the John D. Bradley Convention Centre on Wednesday. From left, Simon Crouch received the Friend of Agriculture Award; Lauren McKerrall and her brother, Ryan, were honoured as 4-H Members of the Year; Joy Anderson accepted the Agriculturalist of the Year Award on behalf of her late husband, Ron Anderson; and Greg Devries and Hilco Tamminga accepted the Agriculture Innovator of the Year Award on behalf of Truly Green Farms. (Don Robinet/Chatham This Week)

Ron Anderson lived agriculture all his life, and he was honoured posthumously on Wednesday with the Agriculturalist of the Year Award by the Chatham-Kent Chamber of Commerce during the annual Rural Urban Dinner.

A lifelong resident of Dover Centre, Anderson farmed all his life, and was known for his work in promoting the cause of, and understanding of, farming.

Among his many activities, he worked for the Municipality of Chatham-Kent Economic Development Services department as agricultural co-ordinator. He was also instrumental in helping establish the Agriculture in the Classroom program that helped children in elementary schools learn more about where their food came from.

Anderson passed away in March.

His wife of more than 50 years, Joy Anderson, accepted the award on his behalf. Speaking before the ceremony, she said, “Ron was well-respected and he had a love of agriculture all of his life, and he was an advocate.”

She added, “He did a lot of things in agriculture.”

His community work included membership in the Rotary Club of Chatham, board member of the St. Joseph Hospital Foundation, and membership in the Chatham-Kent Chamber of Commerce and Wallaceburg and District Chamber of Commerce. He was active in politics as Federal Kent Progressive Conservative Association director, was president of the Chatham-Kent Progressive Conservative Provincial Association and ran as a provincial candidate in Chatham-Kent.

Truly Green Farms received the award for Agriculture Innovator of the Year. The Bloomfield Road facility opened with a tomato growing operation of 22.5 acres in 2013 and the second phase of the facility, also 22.5 acres, is set to begin planting next week.

Accepting on behalf of Truly Green were Greg Devries and Hilco Tamminga, two of the partners. Other partners are Jennifer Devries, Ann Tamminga, Phil and Janice Bultje and Charles and Jennie Devries.

Truly Green efficiently uses waste carbon dioxide from the GreenField Specialty Alcohols plant across the road and beginning next year, will be using waste heat as well.

But Greg Devries is quick to point out that their employees are what makes the greenhouse operation a success. “It’s all about the people,” he said. “Building the plant is the easy part.”

Veteran journalist Simon Crouch was honoured with a Friend of Agriculture Award. Currently working for Blackburn Radio in Chatham, he also has extensive print experience, including Chatham This Week and The Chatham Daily News.

Although he covers all types of news stories, agriculture has always been a passion. “I’ve always worked in fairly rural areas,” said Crouch, who attended the dinner with his wife, Eileen. “It’s been one of the most interesting beats to cover.”

He said technological advances have made big strides in agriculture. When he first moved to the area in 1981, farmers grew about 100 bushels of corn per acre. Now, the average is above 200 and 300 is not unheard of.

Also honoured were sister and brother Lauren and Ryan McKerrall of Chatham Township, who were named 4-H Members of the Year.

Lauren, 18, and Ryan, 16, both joined the 4-H movement at age 11. The siblings are the children of Rob and Maureen, and the family also includes their brother, William.

Lauren, a student at Ursuline College Chatham, said, “You meet really awesome people and get the opportunity to grow as a leader, not only in the club, but in the community.”

Ryan, who attends Chatham-Kent Secondary School, said, “I love different aspects of agriculture,” and he pointed out that 4-H is not just for youth who live on farms, but for those who live in urban areas as well, with clubs covering not just crops and livestock, but interests such as canoeing, nature and Lego. His club experience includes plowing, sugarbeets, field crops, sewing and cooking.