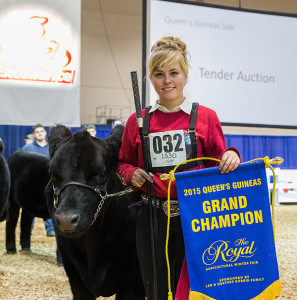 A steer named “Last Chance” was the first buying opportunity at the Queen’s Guineas Live Sale at The Royal Agricultural Winter Fair (RAWF) in Toronto on Nov. 6. Trainer and owner Sylvia Megens of Goodwood, Ont., and Last Chance took the Grand Champion ribbon during the competition earlier in the day.

A University of Guelph agriculture graduate, Megens has been showing cattle at the RAWF for 12 years. She intends to use her experience and her education to become a 4-H leader and to continue showing cattle.

Last Chance weighed in at 1330 lbs and was purchased by Highland Packers Limited of North York for $10/lb.