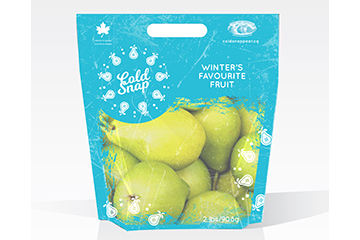 Retailers in Ontario and the Atlantic provinces will be able to start selling a “premium” Canadian pear later this year. The Cold Snap is a culmination of more than 20 years of research and development.

The pears are packaged in two-pound bags with text that explains the history and “romance” of the pear, says Matthew Ecker, sales and business development manager of Vineland Growers Co-operative in the Niagara Penninsula. The new fruit has extended shelf life and will allow consumers to buy local pears throughout winter.

The co-op is using storage technology developed for apples to extend the pear’s hearty texture and flavour. The fruit will debut at Toronto’s Royal Agricultural Winter Fair in November.

About 6,000 bushels will make it to market in Ontario where 20 growers, members of the co-operative, have been nursing the new variety. The Cold Snap pear tree starts bearing fruit after five years and Ecker expects production to double annually for the next five years.

The pears will sell for a premium price, he says, but that has yet to be established.

“The biggest thing is it’s a great tasting pear with a really nice shelf life—really beautiful,” he says. “It’s hearty, it gives the Canadian consumer an opportunity to buy local pears beginning of November and ride it through to February or March.”

Ecker says all major retailers have supported the program. “We feel a lot more comfortable because we know we have partners committed to this program.”

The first rootstock was planted in Niagara on the Lake in 2007 and the density of 1,000 trees to an acre was novel. But with retailers clamouring for more and more local produce, the Cold Snap looks to have markets for every pear the orchards will grow.

« Samuel Grindley Howe Found Buxton To Be Free And Prosperous 2016: The UN International Year Of Pulses »