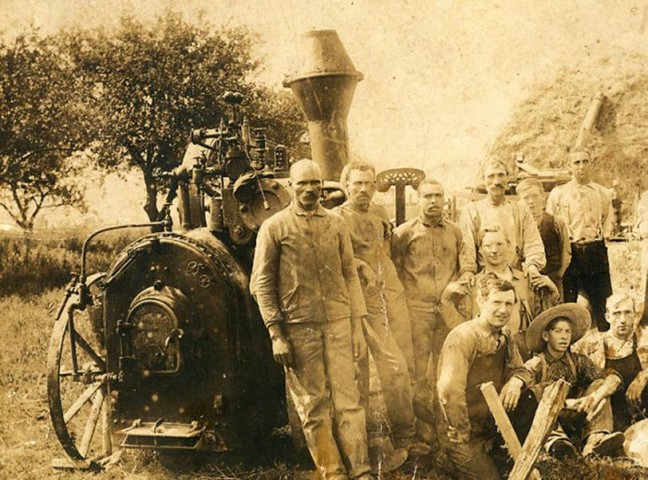 A horse-drawn steam engine on a Buxton-area farm from approximately 100 years ago. (Photo courtesy Shannon Prince)

I have mentioned many times that the agriculture sector in Chatham-Kent is complex and innovative. But it is also rich in history.

February is Black History Month, and I thought I would use the next two weeks to feature an article written by Bryan Prince that describes farm life in the Buxton area. Here is Part 1.

“Buxton is certainly a very interesting place. Sixteen years ago, it was a wilderness. Now, good highways are laid out in all directions through the forest; and by their side, standing back 33 feet from the road, are about 200 cottages, all built on the same pattern, all looking neat and comfortable. Around each one is a cleared space, of several acres, which is well cultivated. The fences are of good order; the barns seem well filled; and cattle, and horses, and pigs, and poultry, abound. There are signs of industry, and thrift, and comfort, everywhere; signs of intemperance, of idleness, of want, nowhere. There is no tavern, and no groggery; but there is a chapel and school-house.

“Most interesting of all are the inhabitants. Twenty years ago, most of them were slaves, who owned nothing, not even their children. Now they own themselves; they own their houses and farms; and they have their wives and children about them. They are enfranchised citizens of a government that protects their rights. They have the great essentials for human happiness, something to love, something to do, and something to hope for.”

These words, written in 1864, come from Samuel Grindley Howe who had been commissioned by Abraham Lincoln to travel throughout Canada West and report on the condition of refugees from slavery. It was hoped that the information from these findings would be useful in preparing for the future for newly emancipated slaves in the United States following the Civil War.

These people followed in the footsteps of Blacks that worked the land that had come to British North America years earlier. Some came as the property of the United Empire Loyalists at a time when there was still slavery here in Canada. Some were granted their own land as a reward for fighting with the British army during the American Revolution. Still others were runaway slaves such as the two former slaves from Kentucky that one source credits as having introduced the growing of tobacco into what is now Ontario.

The Elgin Settlement, which contained the Buxton mission, was composed of 9,000 acres in Raleigh Township, Kent County. It was founded in 1849 as a refuge for runaway slaves. The economy, naturally enough, evolved primarily around agriculture. These early pioneers brought with them the farming skills that they had acquired on southern plantations and in some cases on farms in northern states and in other areas of Canada. The land was divided into 50-acre lots and sold for $2.50 per acre. Residents had 10 years to pay for it. As soon as small clearings were made in the forests of oak, hickory and elm, crops were planted. A report given in 1852 states that “the land is best adapted for the culture of wheat; but it also produces Indian corn, tobacco, and hemp, equal to any that is grown in the Western States.”

And you all thought that growing hemp just began a couple of years ago!

A major obstacle that stood in the way of the successful cultivation of crops was the fact that much of the settlement was low-lying and marshy and often the water puddled on the land well into planting time. A system of drainage ditches was developed to alleviate this problem. This allowed for the production of crops in addition to those just mentioned – hay, oats, potatoes and turnips.

Bryan Prince is well known in Chatham-Kent and beyond, authoring four books on slavery, the Underground Railroad and the American Civil War. He has won numerous awards, including the Chatham-Kent ‘Citizen of the Year’ in 2014 along with his wife Shannon. He has been a member of many historical initiatives and lectures extensively across Ontario and the U.S.