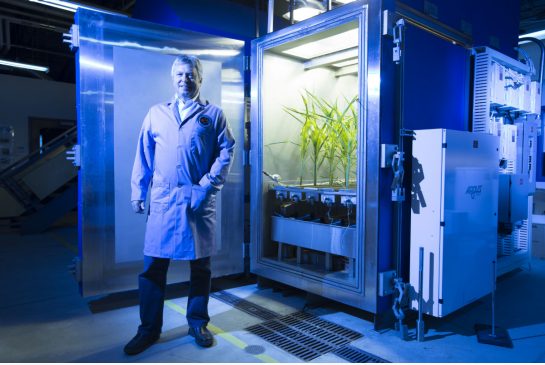 From OMAFRA Research and Innovation News
By: Kate Allen Science and Technology Reporter

On Thursday morning, Mike Dixon woke before dawn to harvest some corn. To pick it, he drove to the university campus, passed through a security perimeter, unlocked his lab, and eased open a massive hypobaric chamber.

Dixon is no ordinary agriculturist. The University of Guelph professor studies how to grow plants on other planets — a crucial resource for the long-distance space travel required to send humans to Mars.

“The food production capability of green plants is the major limiting factor in how far away from Earth we can go and how long we can stay,” says Dixon. “We simply can’t carry enough food to survive indefinitely. We need to produce our own food, and the only critter that does that in this universe at the moment is green plants.”

At his Controlled Environment Systems Research Facility, Dixon and his team subject a rotating selection of crops to a battery of environmental stresses comparable to what they might experience in the harsh Martian environment.

NASA’s Curiosity rover has shown that Mars was once much more like Earth — though its year, and therefore its seasons, are twice as long as ours. The robot uncovered evidence of ancient stream beds and some of the key chemical elements for life in its soil, suggesting life could have existed there billions of years ago. But something happened to turn Mars into an inhospitable “red planet”: it barely has an atmosphere, and the average temperature is -60 degrees Celsius.

“We’re not going to instantly go to Mars, plant a garden and live happily ever after,” says Dixon. “There’s a generation of science to be consumed.”

The 14 hypobaric chambers in Dixon’s lab allow the researchers to control one significant difference between Mars and Earth: atmospheric pressure. Our planet averages just over 100 kilopascals at its surface; Mars averages less than one. If plants refused to thrive in anything lower than the full Earth atmospheric pressure, “we’d be done,” says Dixon.

Yet pressure is hardly the only environmental hardship. The chambers also allow the scientists to control the availability of water, light, nutrition, carbon dioxide, heat, and humidity, all while continuously measuring the plants’ responses.

In general, the research coming out of Dixon’s lab has shown that plant life is exceptionally resilient.

“They seem to adapt to some pretty weird environmental cocktails,” he says. With a minimum of oxygen, carbon dioxide and light, plants retain most of their productivity even at a tenth of the Earth’s atmospheric pressure. The upshot is that astronauts on Mars could conceivably grow their own food in an inflatable tent (perhaps manufactured on a 3D printer), a much more realistic scenario than recreating full Earth conditions in a rigid, pressure-controlled greenhouse.

One make-or-break variable, however, remains out of grasp — at least for now. Radiation is cosmic enemy number one when it comes to earthly life in space, for both people and plants. But those conditions are very hard to mimic here: to truly measure how radiation affects plants and their genetics, the best laboratory is outer space.

“Growing the first plant on the moon is the kind of science first that Canada can and should aspire to,” says Dixon.

Space agriculture research benefits earthlings too. Dixon’s corn experiment is part of a breeding program that is investigating drought-tolerance characteristics, helpful for withstanding the effects of climate change. Other research is transferable to Canada’s far north, which currently relies on expensive, imported food. The demands of space travel are also helping scientists learn how to recycle resources better.

But Dixon has his eyes on the skies. In his talks to schools, “I tell them that the Canadian horticultural mission specialist on the first trip to Mars is in Grade 3 today. And you can hear a pin drop.”