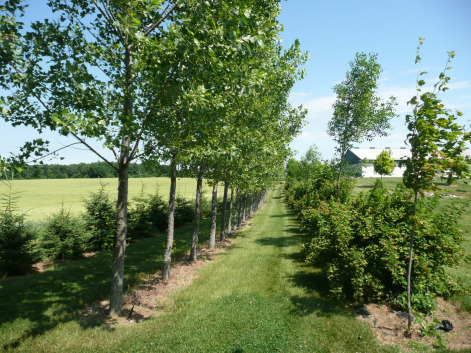 From FCC Express By Owen Robert

Anyone who questions whether Ontario farmers are conservationists should count the trees being planted for windbreaks with land stewardship technician Amanda Blain.

Earlier this year, Blain, who’s with the Lower Thames Valley Conservation Authority in Chatham, ordered 34,000 more trees than in 2015 for the tree-planting programs she administers on behalf of the province for farmers and rural landowners in Kent, Middlesex and Elgin counties.

These counties have exceptionally fertile farmland. But they’re also prone to wind and rain erosion because they’re relatively flat (especially Kent). Windbreaks are as important here as they are anywhere in the province.

Blain’s extra initial order put her total number of trees for the program at 100,000 saplings.

But through the winter, interest kept growing. And next month, when trees actually start going in the ground, the final tally is poised to reach even greater heights. In fact, she expects farmers and the two planting crews she employs will plant closer to 130,000 trees. That’s an increase of more than one-third from last year.

“Farmers talk to one another, and these programs have really taken off,” Blain says. “Farmers are very aware of the environment, and how their children and future generations will benefit from tree planting.”

The most popular program she administers is sponsored by Trees Ontario. It usually covers up to 75 per cent of the cost of trees, and in some cases, may cover the total cost.

Each tree costs about $1, and farmers must commit to planting 1,500 trees.

Blain says the most popular species are white cedars. Others farmers like are white spruce, sycamore, silver maple and red oak.

Blain expects business next year to be even busier – she says she already has a long list of people who missed this year’s March 15 deadline for ordering trees.

Windbreaks have numerous advantages besides erosion control. The Ontario Ministry of Agriculture, Food and Rural Affairs calls them “an effective way to trap snow and prevent snow build-up around driveways and laneways, buildings, farmyards and other high-use areas.”

Spring, says the ministry, is the best time to plant trees.