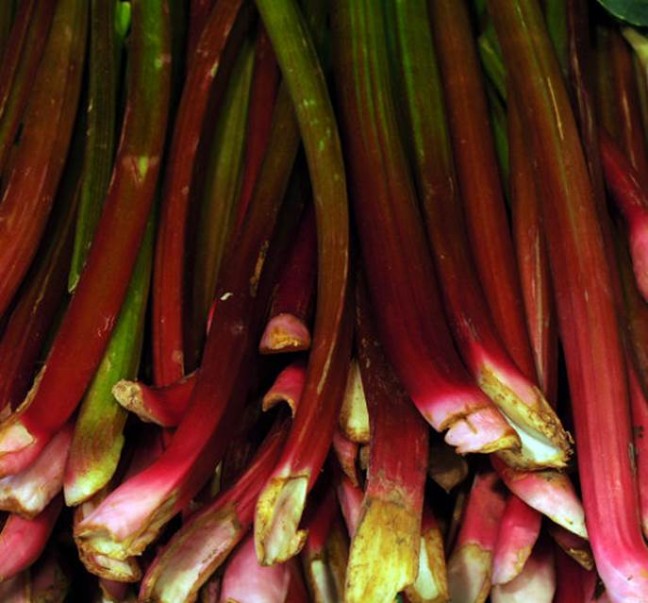 Along with local asparagus, which I hope you have picked some up, local rhubarb is now available. Packed with high nutrition at a low cost, rhubarb is one of spring’s favourites, as it contains calcium for bone health and potassium for proper organ function.

Rhubarb thrives in areas of direct sunlight and can successfully be planted in containers if they are large enough to accommodate a season’s growth.

Rhubarb damaged by severe cold should not be eaten, as it may be high in oxalic acid, which migrates from the leaves and can cause illness.

In traditional Chinese medicine, rhubarb is one of the most widely used herbs, and the rhubarb roots have been used as a laxative for thousands of years. Rhubarb also appears in medieval Arabic and European prescriptions. It was one of the first Chinese medicines to be imported to the West from China. The primary result of rhubarb root as a herbal medicine is a positive and balancing effect upon the digestive system.

Rhubarb leaves contain poisonous substances, including oxalic acid, which can be harmful to the kidneys. A number of humans have been poisoned after ingesting the leaves. Such poisoning was a particular problem in the First World War, when the leaves were recommended as a food source in Britain.

Rhubarb is 95 per cent water and contains a fair source of potassium, contributes minor amounts of vitamins, and is low in sodium. Rhubarb’s crisp sour stalks are rich in vitamin C, dietary fibre, and calcium, although the calcium is combined with oxalic acid and so is not easily absorbed by the body. Rhubarb is somewhat acidic (pH 3.1-3.2) but in most recipes this is normally offset by sugar. One cup of diced rhubarb contains about 26 calories.

Rhubarb has other uses which are not so well known. If your pots and pans are burnt, an application of rhubarb over the affected area will bring back the shine.

Rhubarb is also used for hair colouring, as it contains a fairly strong dye that can create a more golden hair colour for persons whose hair is blond or light brown.

Rhubarb leaves can also be used to make an effective organic insecticide for any of the leaf eating insects such as cabbage caterpillars, aphids, peach and cherry slug.

June 6-12 is Local Food Week across all of Ontario; in Chatham-Kent we will be having a flag raising ceremony and a Farmers Market in front to the Civic Centre in Chatham on Monday, June 6 beginning at 11 a.m. until 1 p.m. Make sure you mark that date down, and thanks for supporting our local food producers.

Farmers are moving large farm machinery on our local roads as they move from field to field during planting season. Please slow down and be very careful when you see these farm implements. Also, please be patient. Our farmers are just trying to do their job and not intentionally trying to slow you down. Thank you for your understanding.

Think about this – ‘God loves each of us as if there were only one of us.’ Augustine