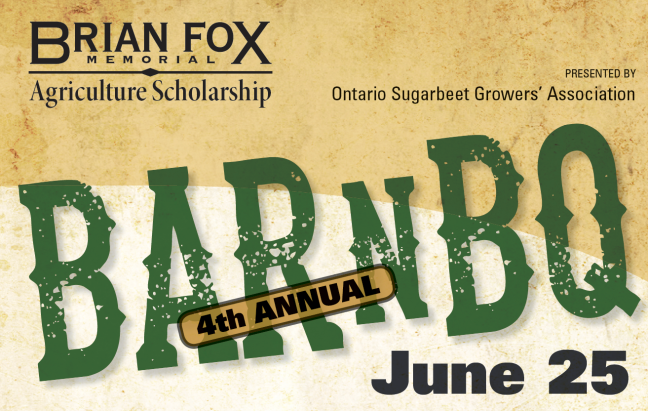 The 4th Annual BARnBQ in support of the Brian Fox Memorial Agriculture Scholarship awards was held on Saturday, June 25th, 2016.

Bernard F. Wierenga and Kaleigh C. Bell were awarded the Scholarships at the BARnBQ.  Both winners were thankful and articulate in accepting their awards.  Kaleigh and Bernard will both attend the University of Guelph in the fall.

The Selection Committee of the Brian Fox Memorial Agriculture Scholarships were greatly impressed with all of the applications received and thankful to all of the Applicants.

The Ontario Sugarbeet Growers’ Association had realized their goal of presenting the first Scholarships in memory of Brian Fox in 2014.  Organization and fundraising had only begun in March, 2013.  This was only achieved through the generosity of its sponsors and donations of auction items.  An ENORMOUS thank you for all donations.

The Ontario Sugarbeet Growers’ Association represents approximately 100 growers with 10,000 acres of sugarbeets growing in most counties of South western Ontario.