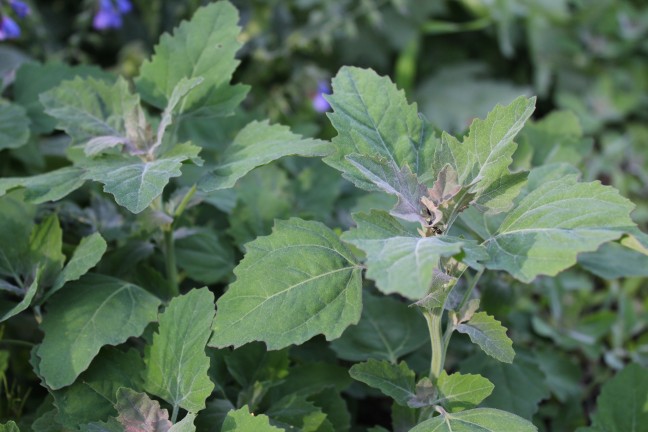 Lamb’s Quarters is Ontario’s worst weed, according to a new survey by University of Guelph researchers.

David Bilyea, a research technician at U of G’s Ridgetown Campus, worked with colleagues Kris McNaughton and Christie Shropshire to conduct a poll of the top five most troublesome weeds on Ontario farms.

Lamb’s Quarters is a common annual weed that grows up to six feet tall. It can adapt to almost any environmental condition and is very competitive with all plants.

Weeds compete with crops for resources, resulting in 10 to 50 per cent crop losses for producers every year.

Bilyea created the survey with the Qualtrics survey system, encouraging farmers to cast an e-ballot to vote their worst weeds. Some 300 producers participated.

The survey also allowed respondents to choose their top five least favourite weeds from a given list.

Farmers who did not see their most unwanted weeds on the list were invited to create their own list.

Bilyea hopes to use his 2016 results to spread awareness of these unwanted intruders, allowing farmers to take preventive measures.

The same poll was completed in 2007, allowing researchers to compare results over the past nine years.

“It is interesting to see that weeds that rated higher last time have moved down the list, and how new weeds have appeared on the list” says Bilyea.

For example, Canada fleabane, commonly found in grain fields, rated high on the list in southwestern Ontario, but was not even mentioned in 2007.

Quack grass moved down the list in recent years, and did not appear in the 2016 survey results; two other grasses now appear on the list. Bilyea says this change could reflect farmers’ improved ability to accurately identify weeds through social media and apps such as “Weed ID.”