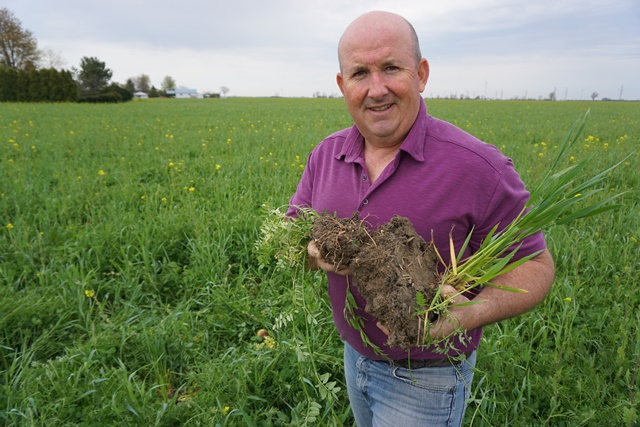 What, though, would you say to someone who plants 18 different cover crops, simultaneously, every single year? What’s the cost, return, and motivation behind such a practice?

For Blake Vince, a Merlin-area farmer who uses the aforementioned technique, the motivation behind such a cosmopolitan cover crop system is rooted in environmental stewardship.

It’s an innovation that has served his farm well since he started incorporating it in 2010, and has also brought him some social recognition.

Vince was a recipient of a Premier’s Agri-Food Innovation Excellence Award in 2015 and was selected as one of three Canadian winners of the Nuffield Farming Scholarship, a Commonwealth agricultural leadership program, in 2013.

“One of the things that spurred me to do this is the ongoing issue with Lake Erie and the algae bloom,” he says. “I think there’s a way to improve the environment and yields without having to till.”

According both Vince and the Government of Ontario’s website, a “polyculture” cover crop system – one that includes many different plant species – has many environmental benefits, such as a less reliance on fertilizers and herbicides, decreased soil erosion, and a greater level of biodiversity and microbial activity in the field.

Of course, he’s saving on fertilizer too since his system helps put a greater amount of nitrogen into the soil.

The process starts when Vince, his father Elwin, and Uncle Tom plant their 18-seed mixture – Vince calls it a seed “potpourri” – into wheat stubble.

Seeds for grasses such as cereal rye and sorghum, broad leaf plants like flax and sunflowers, and many different root crops and legumes all go into the drill together; they are then distributed through the field at a rate of approximately 45 to 50 pounds per acre.

The cover crops grow and overwinter until the spring planting season. At that point, cash crops – namely corn – are planted directly into the mass of multi-coloured greenery, and the cover crop is eliminated with herbicide. Because of how supple the cover crop mixture is, Vince also says planting into it is very easy.

Overall, Vince says he is going to continue changing his cover crop system based on how it affects both his farm environment, and the area around him.

In terms of next steps, Vince says he would “like to get animals back into the rotation.”

“We need to graze these cover crops – that would capture the manure while turning green plants into protein,” he believes.