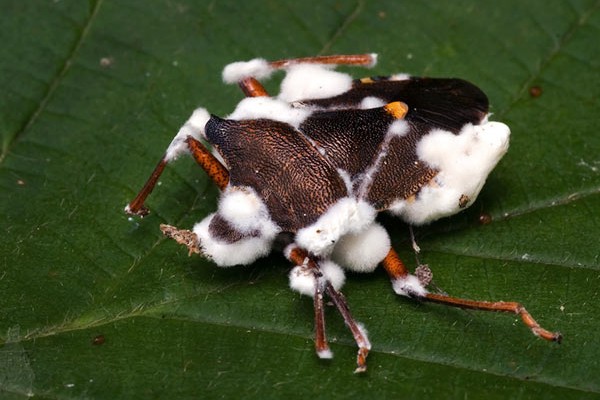 Brock University researchers are looking for growth – fungal growth that is – and they are doing it with agriculture in mind.

By studying how the ground-based fungi work within the soil, they could develop an effective and more naturally derived method of pest control that also promotes plant growth.

“These fungi exist all over the globe. There are numerous varieties in Ontario alone, and each has its own unique characteristics and target insects,” says Barelli.

Entomopathogenic fungi propagate using spores. Spores land on insects, and the crawling critters are consumed by the fungi over the next five to 11 days. Once the insect dies, the fungi emerge and release further spores.

This is the basis for the fungi’s usefulness, and according to Barelli, the reason they have been studied as a natural source of pest control for several decades.

Still in the project’s inaugural year, the first task for Barelli and her colleagues is to map the gene expression profile of the fungi; that means looking at how the organisms’ traits express themselves, send signals, transport, handle stress, and so on. The fungi can then be put into soil, and its physical responses can be measured against varying nutrient levels.

Once they have an understanding of the fungi’s behaviors, Barelli says they will be able to investigate which traits can be controlled to make propagation easier. The fungi could, for instance, be given drought tolerance, or a greater ability to stay fixed within the soil under wet conditions.

Such traits would, says Barelli, be useful for farmers economically and environmentally – the fungi’s staying power and targeted reproduction would mean a lesser need for synthetically produced pesticides.

The research is supported by funding from the Natural Sciences and Engineering Research Council of Canada’s Alexander Graham Bell Scholarship, as well as the Queen Elizabeth II Graduate Scholarship in Science and Technology.