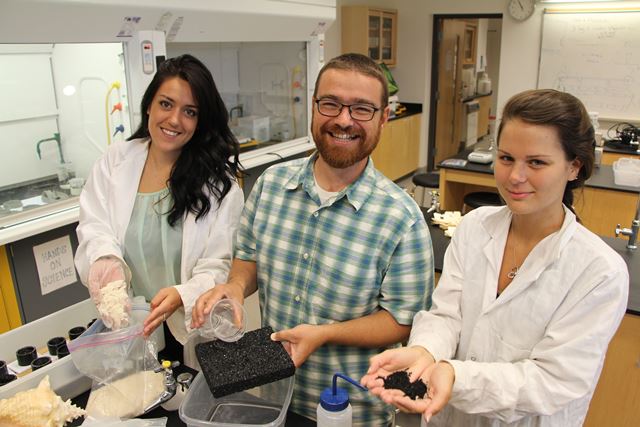 » Ag News » Researcher Coaxes Biomaterial Out Of Its...

There’s a naturally-occurring material found in discarded shells from crab and shrimp that offers properties with promising industrial uses.

Now, a researcher at Lakehead University is studying the material, and exploring potential for a broad range of applications ranging from wastewater treatment to better pavement.

Dr. Chris Murray studies the properties of chitosan – a naturally occurring long sugar molecule that is found in nearly all invertebrates.

“Chitosan plays a role in many animals that have exoskeletons,” says Murray. “It can be really tough and it provides a lot of physical strength for organisms.”

Murray began studying chitosan as a graduate student at the University of Guelph. He developed an interest in the kind of polymers found in nature; his then-supervisor, Professor John Dutcher, also continues to study them, especially those associated with bacteria and the biofilms that they make.

“I’ve always been amazed by the properties of things that are naturally-occurring,” Murray says. “For example, spider silk has properties we can’t come close to mimicking with our own human-made materials. That is fascinating to me.”

“The chitosan membranes we helped develop offer green benefits beyond the fact that it comes from crab and shrimp shells,” says Murray. “If a petrochemical plant that is producing plastics can swap out the energy-hungry processes they use with a couple of membranes, it’s a better option environmentally.”

Chitosan has a lot of potential, but there are also obstacles. Although there’s plenty of it, it’s found only in small bits – the size of crab or shrimp shells.

“It doesn’t really melt,” Murray says. “You can’t take all kinds of little bits and melt it to make one big chunk, like you can with a lot of synthetic thermoplastics we use.”

Murray has spent years working around chitosan’s challenges. His team experimented with chitosan and crumb rubber – a byproduct of rubber tire recycling – to create pavement with various permeability properties.

Some of the pavement – which used chitosan as a glue to hold the crumb rubber together – allowed water to drain to the ground. Murray says that product might have applications for roads and parking lots to prevent flooding.

Today, Murray and his Lakehead colleagues are at work on a water quality project, and he says chitosan will likely play a role.

“We might move it to places in water where it wouldn’t normally be found, but it’s a product that belongs in water,” Murray says. “It is reactive and has great mechanical properties. It’s quite stiff when you treat it properly. I’m interested in seeing what it can do.”

« Farm Product Price Index Down In June Food For Thought: Beets Were Used To Treat Blood Disorders Because Of High Iron Content »