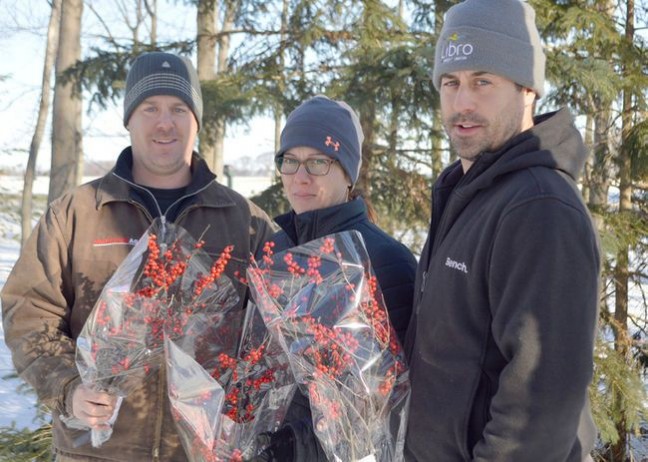 Paul (left), Lynne, and Nick Warriner hold the last of this year’s winterberry crop at their farm just south of Blenheim. The perennial shrub is popular around Christmas and as a winter decoration, so the harvest season lasts from early November to early December. Louis Pin/Postmedia Network

The Christmas decorations come out, the tinsel and trees, the ornaments and the outdoor lights. But one seemingly now-iconic decoration has become a fixture in many people’s Christmas collection, around wreaths and in outdoor planters.

They’re called winterberries, and you can find the berries grown in Chatham-Kent — courtesy of the Warriner siblings.

Paul, Lynne, and Nick Warriner live south of Blenheim. They inherited their parents’ farm in 2008, and soon after set aside two acres for winterberry shrubs, a side project of sorts. Their parents grew tobacco and strawberries but had never tried winterberries.

The idea was Nick’s, who became interested while working at a garden centre between semesters while at university.

“I was working one summer in Massachusetts,” Nick said. “I was living [there] that summer, and I was basically transplanting some plants with the owner … he said if I had some land, I would plant [winterberries]. And I called these two (nodding to his brother and sister) and said ‘we should look into this’.”

The siblings had just inherited the farm from their parents and were looking for a crop that didn’t require an abundance of labour. Winterberry is a perennial, it can produce for roughly three decades, and is harvested in the late fall — a perfect complement for the Warriners’s summer crops.

Because winterberry shrubs take years to mature, the two acres they started with continue to yield more and more product annually. It’s a long game, and the profit is not enough to subsidize any significant income gap.

But for a side project, it works like a charm.

“The ones that we planted originally were already a few years old,” said Paul. “It would take at least probably six or seven years before it would be harvestable … but once you start harvesting you can basically [go back] every year.”

Winterberry is a relatively safe bet for growers. The crops are hearty and native to Ontario, and are not often affected by pests and disease. Even birds and deer generally avoid the berries themselves — the selling feature around Christmas time. The berries are bright red and keep their vibrant colour through the winter and often into March or April.

In fact, the biggest problem the Warriners face is mild October and November months.

“When we run into mild falls it delays the harvest, and … it’s basically a Christmas decoration,” Paul said.

“It makes it so we can’t harvest it in time,” Lynne added.

The plants themselves aren’t negatively affected, but they do fail to shed their leaves. The siblings have tried actually hand-picking the leaves from the plants in time for Christmas sales, but the task was too time-consuming almost immediately.

They’ve only run into the problem twice since they started harvesting.

“We’re still evaluating whether we want to increase our acreage,” Paul said. “We’re starting to do more wholesale stuff now, so we’re going to see where that goes.”

The shrubs also have a second function. Not So Hollow Farms, a nursery near Barrie, doesn’t sell winterberry shrubs as Christmas decoration at all.

“We don’t necessarily sell them as a crop … we sell them as naturalization,” said Ian Payne, owner of Not So Hollow Farms. “For wildlife. To be honest I don’t think anyone’s come in looking for them for decoration.”

The species is in the Carolinian zone, native to Ontario and its propagation is encouraged by the Lower Thames Valley Conservation Authority. Randall Van Wagner, manager of conservation lands and service with the LTVCA, said they encourage people to choose native plants for everything from gardens to rehabilitation efforts.

“Anything that’s native, we’re all for planting that,” he said. “It’s adapted here, it’s been here for hundreds of thousands of years.”

The Warriners do not have the quantity to start selling winterberry plants themselves, but they probably don’t need to. According to Nick, the product has gone over well since they started marketing to independent vendors, and some people even make the trek to their rural showroom to see what they have.

“We sell right off the farm here,” Paul said. “We’ll sell direct to customers, and then we wholesale to Sarah’s Farm Market in Chatham, Ross’ Nurserymen, and the Glasshouse.”

“Each year we’ve been able to pretty much about 40 per cent increase in our market just by the plants themselves,” he added.