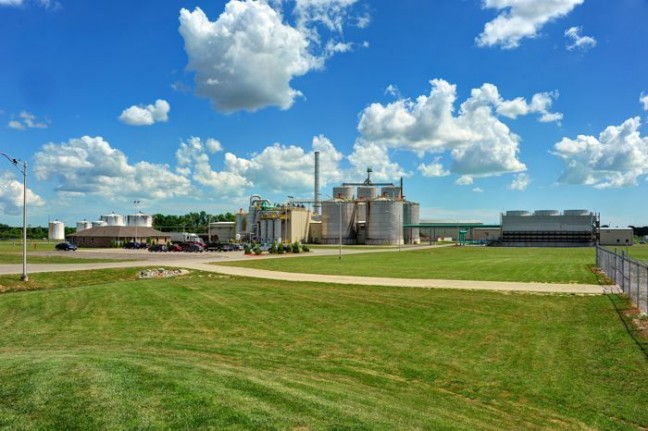 The company – which has been making ethanol from locally-sourced corn since 2008 – has been continuously augmented with technology designed to increase efficiency as well as scope of production.

IGPC Ethanol Inc. is a finalist for the London Chamber of Commerce’s 2017 Agribusiness Award, as well as a significant local employer and long-time member of Ontario Agri-Food Technologies, a Guelph-based organization that helps Ontario’s agri-food sector capture new markets and access new technologies.

“We’ve gone from about 35 to 65 employees since opening,” says Jim Grey, the company’s CEO. “We are trying to create an agricultural bio-cluster, where we develop new and more efficient ways of handling ethanol and its by-products.”

Using the by-products created from ethanol production is not necessarily a new practice; indeed, distillers’ grains – or what’s left over after grain is fermented – are already commonly sold as animal feed by ethanol producers.

What’s unique about Grey’s company, however, is the focus he and his colleagues put on technologies that can be directly “bolted-on” to the plant.

One of those technologies, for instance, lets Grey and his colleagues produce edible oils from specific varieties of algae – yes, that murky green stuff usually seen in water.

Corn is full of sugars which can be fermented to create ethanol, says Grey, but those same sugars can also be consumed by algal cells. In turn, those algal cells excrete versatile edible oil useful in food processing and other industrial applications.

“The oil is high in omega-3 fatty acids too. So, it’s valuable in quite a few health products,” he says.

Another notable improvement to the facility came as a result of an interest-free loan received from Growing Forward 2, a federal-provincial-territorial initiative, through the AgriInnovation Program.

The loan, says Grey, gave them the ability to purchase equipment that significantly increased their ethanol production efficiency, or how much ethanol could be derived from the fermentation process.

Hydro One, too, awarded IGPC a grant for their work on power-efficiency improvement, and reducing their dependency on the grid.

“We are also looking into processes where our dry distillers’ grains could be used to make hardwood flooring. We’re already in conversation with a couple companies who are interested in exploring that,” he says.

As of this April, Grey says the company will be undergoing another expansion to double its ethanol production capacity. At the same time, Grey and his colleagues have struck a partnership with Air Liquide, an international supplier and manufacturer of industrial gasses, to capture and use the carbon dioxide produced by the facility itself.

“It’s adding another layer of sustainability to the business,” says Grey. “We’re hoping to have 100 employees by the time we are done the project. Ethanol is a renewable fuel, but we like to think our sustainability is more than that […] growth and diversification are good things for a small community.”