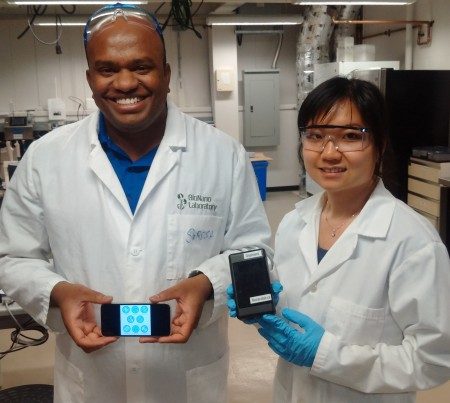 University of Guelph researchers who created a hand-held instrument to quickly and easily detect animal diseases have received a funding boost.

They’ve been awarded $125,000 (U.S.) to fund field trials under the direction of engineering professor Suresh Neethirajan, director of U of G’s BioNano Laboratory and the lead developer of the nano biosensor.

The portable sensor allows dairy farmers to rapidly diagnose ketosis and other metabolic diseases in cows by analyzing a small volume of blood or milk. “The benefit of this sensor is for a farmer to test his herd on the first suspicion that something is amiss, even before there are obvious physical signs,” Neethirajan said.

Currently, blood samples must be taken and sent to a lab for analysis, a process that is costly and can take five to seven days to return a diagnosis. “Especially in isolated areas, a lot of valuable time can go by waiting for a veterinarian and then lab results — time that can be critical.”

Neethirajan and his team — including Profs. David Kelton and Todd Duffield of the Ontario Veterinary College — developed the sensor to detect minute electrochemical activity in blood that indicates metabolic disorders, even in animals that appear healthy.

Results are provided within one minute. Using the sensor and a smartphone, farmers may use technology to make their own diagnosis and begin treatment. The device may also be adapted to an in-line robotic milking machine, allowing the entire herd to be tested simultaneously.

There are plans to make the device available and accessible in developing countries.

The funding comes from the Supporting Evidence Based Interventions initiative (SEBI), a three-year project at the University of Edinburgh that seeks to improve livestock health and productivity in developing countries.