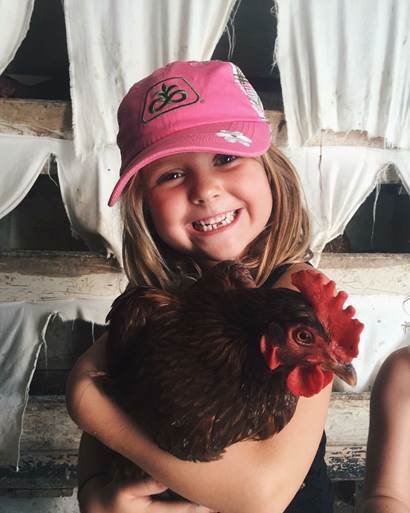 My granddaughter Lyla Kivell at a local chicken farm.

I have written hundreds of articles on various sectors dealing with our agricultural world. This industry, as well as many industries in our modern society, has been seemingly dominated by the male gender. When it comes to agriculture, women have always and continue to play a vital role in the development and sustainability of the family farm operation as well as agricultural businesses.

I was not raised on a farm. But my mother was, and I recall many stories from her and my grandmother, Betty Coutts, on her role when it came to the family farm.

My grandparents settled in Tilbury East in the Jeanette’s Creek area. They initially lost their farm during the Depression years and had to start over again. Those were very tough years, and if not for the determination and persistence of my grandfather and also my grandmother, they would not have made it.

My grandmother was right there every step of the way. I remember the story of her giving birth to one of my uncles. Later that day, she was out in the field picking tomatoes.

In my 40 years of working in the agricultural sector, I have had the honour and privilege of working with so many amazing and inspiring women of all ages.

The Chatham-Kent Chamber of Commerce Rural Urban dinner is held each year and one of the highlights is the ‘Agriculturalist of the Year Award’. Since 1976 when this award was first introduced, only three women have won this award, and two were a wife and husband team. Are we saying that in these 40 years, there have not been more women deserving of this award?

The Kent Agricultural Hall of Fame has inducted people from across Chatham-Kent who have made significant contributions to agriculture in our area. Of the 176 people presently inducted into the Hall of Fame, only 26 have been women.

Some say the role of women in agriculture has not changed much over the years, but rather women are taking on more of a leadership role – from being the farmer’s wife who took care of various aspects on the farm on a daily basis to helping manage the farm full-time.

The majority of full-time women on the farm are also full-time caregivers for children and the elderly, and almost half of all women in Canadian agriculture also work in positions off the farm as well.

There are ongoing issues still pertaining to women working in agriculture, such as recognition, respect, discrimination, compensation, as well as others. Things are slowly changing as can be seen by some advancements in certain areas.

There are more training and seminars now featuring the role women play in agriculture.

Women’s numbers are growing as graduates from agriculture faculties and agri-related fields of study. At our University of Guelph Ridgetown Campus women now make up over 40 per cent of agriculture diploma students.

Here in Canada and across our world, women are the mainstays of rural agricultural communities, something we should all be thankful for.

Think about this – Dying for us was the most Jesus could do. Living for Him is the least we can do.