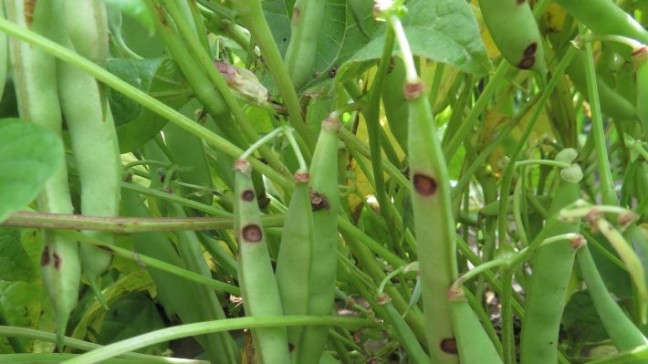 » Tek Talk » THE RACE AGAINST ANTHRACNOSE

The 2016 season was relatively dry, and one thing edible bean growers did not have to contend with was anthracnose. In Ontario we have not seen a significant infestation of anthracnose since 2010. Can we continue to keep anthracnose at bay into the future?

History of Anthracnose in Ontario

Ontario growers experienced their first major infestation in 1977. Bean seed harvested that year was significantly impacted and strict seed inspection protocols were put in place on seed fields in the years to follow. At that time Race 23 was the predominant isolate.

Bean industry professionals often quote an 8-10 year time frame between significant infection issues in Ontario, which occur when the predominant race of anthracnose changes. Some current edible bean varieties carry resistance to just one specific race of anthracnose while others are resistant to multiple races. Plant breeders are working to pyramid resistance and develop new varieties that provide protection against several of the races encountered in North America. However, if a new race moves in the resistant edible bean varieties used against past races will not be effective.

In 2004 farmers began the battle with Race 73. Surveys conducted in 2005-2007 indicated that over 95% of the anthracnose isolates were Race 73, although at least 5 other races were found in Ontario. In 2010 there was another significant outbreak, and in 2014 Ontario farmers were also finding anthracnose in their fields. In both years it was still predominantly Race 73. There is some concern that we are getting beyond that 8-10 year time frame and an outbreak of a new race is just around the corner.

Along the timeline of anthracnose development in Ontario, we can also mark changes in cultural and chemical control practices. Pyraclostrobin (Headline, BASF) was registered in edible beans in Ontario in 2002, and azoxystrobin (Quadris, Syngenta) in 2005. Strobilurin fungicides effectively prevent disease development by interrupting spore germination. Other important chemical and cultural control measures came in 2006. Azoxystrobin (Dynasty, Syngenta) seed treatments were added to fludioxanil + metalaxyl-M (Apron Maxx, Syngenta) to significantly increase disease control, and the industry moved to 2 years of seed production in Idaho with 1 year in Ontario. And finally, since 2010 all Ontario pedigreed seeds fields are being treated twice with strobilurin fungicides in an effort to prevent disease development and transmission.

Anthracnose infection appears as brown to black lesions on petioles (leaf stems) and along leaf veins on the underside of leaves. Pods will develop sunken, circular lesions that are light to dark brown, with a well-defined black ring often surrounded by a red-brown halo. The center of the lesions on pods may have a white to pink gelatinous mass of spores, which turns to grey or black granules as it dries. Seeds can be significantly discoloured or shriveled. If infection occurs late in the season, seeds may carry anthracnose without any visible symptoms on the seed. Yield losses may be up to 100%, and visual quality of seed in infected fields may render the crop unmarketable.

Transmission of the disease is usually from infected seed. Efforts to produce seed in arid regions such as Idaho have significantly reduced issues with anthracnose in Ontario. Anthracnose can overwinter in fields on edible bean residue. Work by Chris Gillard, University of Guelph – Ridgetown Campus and Bob Conner, AAFC in Morden MB, has shown the disease can survive for up to 20 months on crop residue on the soil surface, and up to 6 months on buried crop residue, so crop rotation and tillage are important in management. Anthracnose can be dispersed through the field by wind-driven rains, on clothing or footwear of people walking through fields, and to a lesser extent on metal farm machinery. Cool to moderate temperatures (12 to 27° C) and frequent rains promote disease development.

Studies led by Chris Gillard in 2014 show that strobilurin fungicides are most effective at controlling anthracnose compared to other active ingredients, and there was little difference between the various strobilurin products. Studies on different application timings in 2005-2006 showed that for a single fungicide application the best timings are at 1st flower (one open flower per plant) to full flower where infection levels are moderate to high. If infection levels are low an application at full flower is effective. The greatest return on investment (ROI) was achieved with an application at 1st flower; this timing was associated with the lowest level of dockage and pick as well as good yield.

Gillard, C. (2016). A summary of 15 years of research on the cultural and chemical control of anthracnose in dry bean [Powerpoint presentation]. Canadian Pulse Research Workshop.