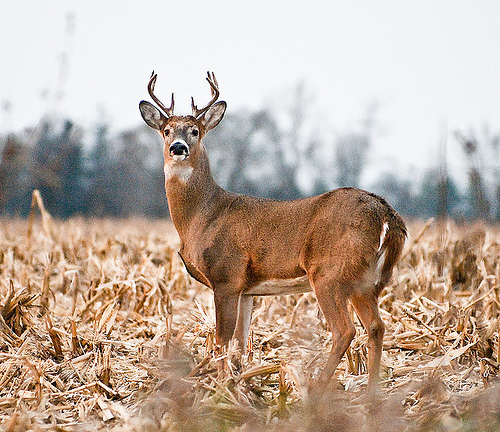 White-tailed deer are an iconic species found throughout most of Ontario. Although deer provide many economic benefits, as well as being significant ecologically, they also pose some key risks, especially for farmers.

The primary human benefit from white-tailed deer comes from the economic benefits they accrue through hunting. According to the 2007 government “Strategy for Preventing and Managing Human-Deer Conflicts in Southwestern Ontario,” because the deer populations have increased significantly since the 1980s when the selective harvest system was brought in, by 2005 approximately 100,000 were harvested. Deer hunting brings in significant revenues to MNRF for licenses and permits, as well as tourism and other associated spending by hunters. The same report estimates that “in 2001, 158,000 deer hunters spent over one million days hunting deer; [and that] deer hunting expenditures exceeded $84 million.”

Selective hunting is not the only reason that deer populations have recovered so significantly. Changes in farming practices that leave more crop residue have left more winter food for deer as well. It is winter conditions that are now most limiting to deer populations, and a severe winter can have a detrimental effect on herds. <http://www.thedailyobserver.ca/2015/11/19/white-tailed-deer-herds-in-eastern-ontario-in-need-of-urgent-overhaul>

However, deer can also be detrimental economically and environmentally. Populations of deer can cause environmental risks such as over grazing on wild plants including threatened species. Recently a herd of deer were culled in Point Pelee National Park <http://www.ctvnews.ca/canada/ontario-first-nation-helping-with-deer-cull-to-help-species-at-risk-1.3239509>  in order to protect the rare forest and savannah ecosystem which contains some rare species under protection.

Significant populations can also put motorists at risk. While a chance encounter with a deer on a hike can be exhilarating, an accidental encounter on a roadway can be very dangerous.

Most significant to farmers is the damage that deer can cause to crops. While there are good estimates of the economic benefits of deer, the costs to farmers are not well measured. The mechanisms for farmers to recover costs are also limited.

Considering that the province values deer for their economic and environmental significance, farmers should be appropriately compensated for the crop and property damage they accrue from deer populations. It is insufficient to simply encourage land owners to capitalize on the economic benefits of deer from hunting. The Southern Ontario strategy from 2007 suggests several possible ways to help farmers prevent issues and to compensate them for damage. These include incentives for protective measures through the Environmental Farm Plan (EFP) or other incentives, improving crop insurance coverage to include deer damage, or direct compensation. Ideally, more than one of these options will be available to farmers to ensure that they are able to protect their sources of livelihood or that they are appropriately compensated for losses.