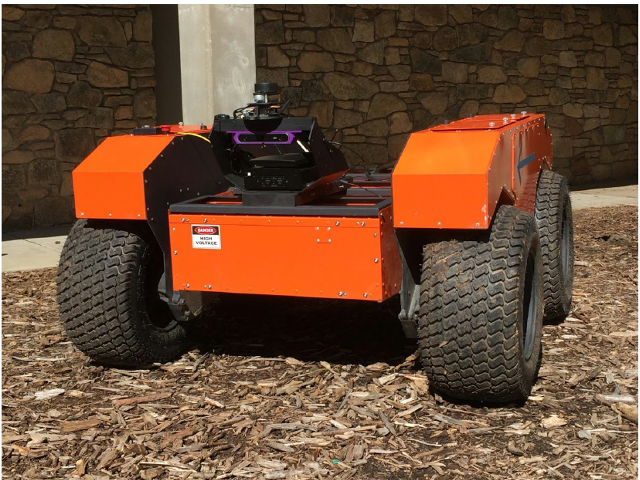 An Ontario company that developed lunar rovers for the Canadian Space Agency has adapted the technology for use on earth. The resulting vehicle – called Argo J5 XTR (Xtreme Terrain Robot) — has applications across a variety of industries, including agriculture.

Ontario Drive & Gear Limited (ODG) is well-known to many consumers as the maker of Argo, popular all-terrain vehicles (ATVs) that can travel on rough terrain through land and water. The Argo J5 XTR is an unmanned robotic platform that travels on rough terrain in a variety of conditions ranging from war zones to underground mines — without putting an individual operator at risk.

“We’ve been working on space projects since 2008, but most years we only got to build two vehicles at a time – a primary and a back-up,” says Peter Visscher, chief technology officer for ODG. “We had an offer from a defence contractor to commercialize the vehicles, so we built a version for use on earth – and being Argo, we also made them amphibious.”

In agriculture, the Argo J5 XTR is being used on the Caribbean island of Martinique. Visscher says his team was challenged to address common health and safety risks to workers, who were using ATVs to spray banana plantations on steep land for black mould. The workers were exposed to fungicide, hazardous terrain and health problems due to climate.

“We came up with a robot that we can mount a small sprayer to,” says Visscher. “It can drive up and down the fields with a remote control, and the operator can stay at the edge of the field without being exposed to the chemical, and without risking tipping over on an ATV while spraying.”

Closer to home, an Argo J5 XTR is also in use by researchers at the University of Guelph for soil sampling in precision agriculture applications. Visscher says he sees potential in the ongoing use of J5s to speed up the soil sampling process.

“In winter, fields are rough and surveyors have to take hundreds of samples,” says Visscher. “If we can automate that process, a soil sampling operator could run three or four of these robots and cover four times the distance from the comfort of his pickup truck.”

How else might Ontario farmers use the J5? Bring ODG a problem, Visscher says. He notes one of the company’s core competencies is its strong engineering group.

“We provide the service of designing and fabricating solutions to just about any problem our customers need solved,” he says. “With Argo being a company that has its roots in extreme terrain, farmers like the vehicle because they can get around in mud and water, and clean-up is easy. The available applications for this vehicle are almost unlimited.”