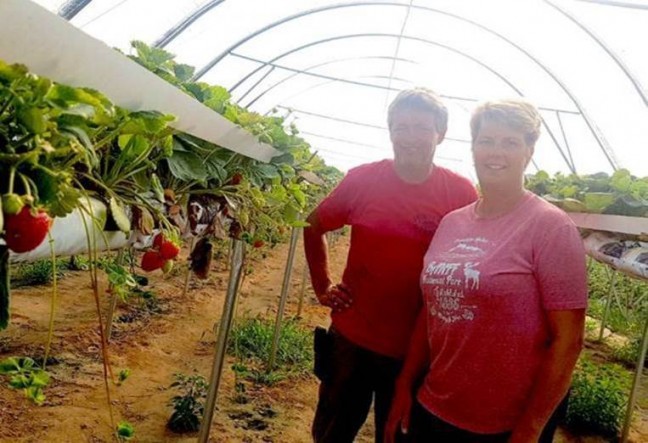 Innovation has been the name of the game at Jennen Family Farm Market for over 25 years and now they’re getting the formal accolades to back it up.

BMO Ontario Farm Family Awards is honouring the Wabash-based farm family, along with 10 other Ontario families.

The Ontario Plowmen’s Association announced the families chosen to receive the awards on Aug. 18, recognizing those who have shown dedication to Ontario’s agriculture sector and the rural way of life.

Peter and Ellen Jennen grow their strawberries beneath high tunnels that are essentially temporary long-tent structures. The tunnels capture the heat during the spring, allowing for a longer growing season as well as providing protection from the rain, hail or frost.

Ellen Jennen said the tunnels add to the quality of their produce.

“We were surprised and honoured, and you look back and think it’s nice to be recognized,” she said Monday.

Peter Jennen said he and his wife were surprised to be honorees, but said they’re just been doing what they’ve always done: focused on a good harvest and constantly innovating.

“(The tunnels) are definitely more management, especially during high winds,” he said. “If we’re not paying attention, we could have structural damage to the tunnels.”

At the moment the Jennens also trying a system where soil troughs are raised above the ground, designed to make it easier to harvest the berries and make the harvest more efficient.

Trying new technology is nothing new for a farming family.

“It’s an innovation inside our innovation,” she said.

“We’ve always looking for little things they can do differently… or trying to time a crop in a time frame that they’re (normally,)not in stores,” Peter Jennens said.

In the near future, the Jennens are looking to branch into fruit wineries as their newest venture.

“All our lives, we’ve been looking at niche markets and we were even emu farmers for five or six years in the early Nineties,” he chuckles. “It was an up-in-coming market but it never did develop the way we were hoping.”

They initially grew a lot of bell peppers and tomatoes before eventually getting into the strawberry business. The three acres they originally devoted to such niche crops has ballooned into 13 acres on which they now grow mostly strawberries but also raspberries, blackberries, tomatoes, hot peppers and other vegetables.

From March to October, the Jennens have a dedicated labour force of 10 workers from Jamaica who help grow and harvest their fruits. Some of their produce goes to large and smaller grocery chains alike, as well as local farmer’s markets. Among those stories is Farm Boy, an Eastern Ontario independent grocery story group that in recent years opened stores in Kitchener and London.

Other families on BMO’s list include Flynn Farms (Clinton) Ltd. from Huron County and the Kniaziew Family who own Orangeline Farms Limited in Essex County. All 11 honorees will be formally recognized at this year’s 2017 International Plowing Match and Rural Expo in Walton on Sept. 19.

Of the Jennens’ children, Rebecca is a CSR representative for South West AG Partners, and Emily is going to teacher’s college in the fall. But their youngest child, 20-year-old Mitchell Jennen, is planning on to follow his parents’ footsteps. He’s recently graduated from the Ridgetown Campus of the University of Guelph and is carving out a farming business of his own after being inspired by his parents.