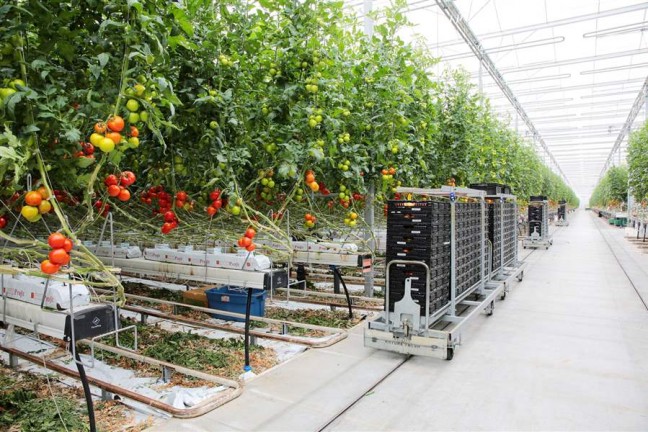 NatureFresh Farms has announced that a planned expansion of its greenhouse in Delta, Ohio, has been put on hold.

The owner of NatureFresh Farms said Thursday that a planned expansion of its large commercial greenhouse in Delta, Ohio, is on hold because of the company’s difficulties in finding and keeping employees.

The Ontario-based company came to northwest Ohio in 2015, with plans to build a sprawling, 175-acre greenhouse over the next seven years at a cost of up to $200 million. So far, the firm has spent about $65 million to get the operation up and running and build out 45 acres of growing space under a roof.

And business has been good. Peter Quiring, NatureFresh’s founder and chief executive officer, said he has the customers to support doubling that acreage.

But he’s holding back on an expansion because of the company’s ongoing struggle with finding workers.

“Labor’s the caveat,” Mr. Quiring said in an interview. “It’s not happening unless we figure out the labor situation. It can’t happen. My bank wouldn’t even let me do it, not that I would.”

Mr. Quiring was in town Thursday for the Northwest Ohio Ag-Business Breakfast Forum near Bowling Green hosted by the Center for Innovative Food Technology. NatureFresh was this month’s presenter.

Between its greenhouse and a distribution center in Maumee, the company has about 220 full-time employees in northwest Ohio. NatureFresh grows about 10 varieties of tomatoes in Delta, which are shipped primarily to customers across the Midwest and the eastern seaboard.

A 45-acre expansion would require another 90 to 100 full-time, year-round employees.

Officials said wages start at more than $12 an hour and can rise to more than $18 an hour for quality employees.

One important source of labor are guest workers from outside the United States. The company currently has 43 employees from Honduras and Guatemala who are here on visas.

The United States does allow companies to bring in foreign workers for agricultural work, but only on a seasonal basis. And while there’s no cap on the total number, workers must go through the application process every year and can’t change employers without a new petition.

Exterior of NatureFresh Farms’ greenhouse facility in Delta, Ohio. A planned expansion of its the facility is on hold because of the company’s difficulties in finding and keeping employees.

Mr. Quiring said Canada’s guest worker program is more manageable for operations like his that can grow produce year-round.

“What we need is a better system of getting labor,” Mr. Quiring said. “We need the American program to be year-round. We need to open that up. We need to bring people here legally.”

In a phone interview, Baldemar Velasquez, president of the Toledo-based Farm Labor Organizing Committee, said that, while there have been a number of well-documented problems and abuses within the farm labor visa program, there are legitimate reasons for keeping it.

One of the chief ones, he said, is the fact that many of those workers don’t want to immigrate full-time to the United States, and the ones who do likely wouldn’t want to keep working in what are largely seasonal jobs.

And Mr. Quiring made those same arguments at the forum.

“Number 1 they’re probably not going to stay with agriculture very long. But Number 2, you’re doing a brain drain from that country again,” he said. “That may help our country, but it certainly doesn’t help theirs. When they go back home they educate their children. They’ve got a chance of taking that country out of the third world status that they’re in and making something of it.”

U.S. Rep. Marcy Kaptur (D., Toledo), who was among the crowd at Thursday’s forum, urged during a question-and-answer session that that those in the agricultural industry push for changes that can improve the country’s visa program for employers and workers.

“We have a unique opportunity with the renegotiation of NAFTA, and I just want to get it in your consciousness and the consciousness of every agricultural person here,” she said.

“This is really important,” she continued. “We’ve got 16 members in the House. We’ve got two senators from Ohio, so that’s 18 voices. If Ohio agriculture could be focused on this, I think we could really make a difference.”

Mr. Velasquez said changes to the visa program would need to come from a place where both labor and business are at the table.

“There’s some things you could do, but to make it politically feasible you have to have all segments of the labor market involved,” he said. “If you have the unions involved and you have the employers involved, it makes it much easier politically to make those changes.”

Even so, Mr. Velasquez disputes the notion that Americans won’t work those jobs at all, saying what they won’t do is work for low wages.

“I can understand how NatureFresh, being under the roof and year-round would want year-round workers, but frankly there are enough domestic workers to do something like that,” he said. “That’s a more controlled climate that would attract local workers or domestic workers if they paid a wage that was high enough.”

Mr. Quiring painted a somewhat bleak picture of their efforts to staff the greenhouse.

“We’ve interviewed around 600 people in the last two years. Of that 600 people, about 30 to 40 percent didn’t pass a drug test. And we don’t care about marijuana, by the way. This is heavy drugs we’re talking about,” he said. “It’s a sad fact.”

NatureFresh hired close to 300 from that pool. Some never showed up, about 40 were dismissed, and another 90 quit — many within their first few days.