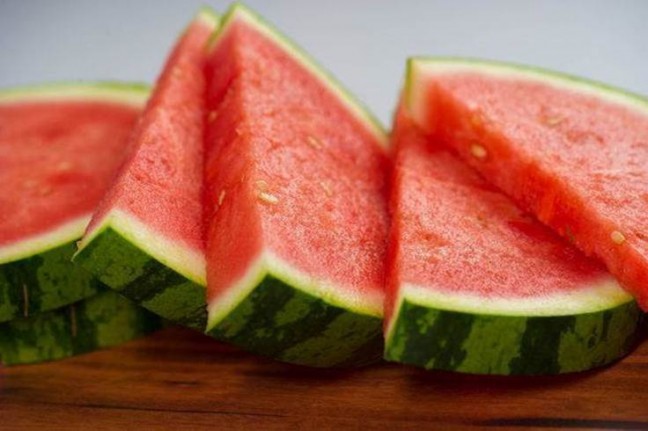 There’s nothing quite like biting into a fresh slice of watermelon, with the juices dribbling down your chin. Delicious, juicy melons are a great source of much-needed water and electrolytes to tame the hot summer temperatures.

Who would have thought the common watermelon packed so much nutrition? The usual notion about watermelon is they are just water with some taste, but not a good choice for nutritional value. Wrong! Watermelon has quite a bit of nutrition, probably more than most people think.

Watermelon is a vine-like flowering plant originally from southern Africa. Its fruit, which is also called watermelon, is a special kind referred to by botanists as a pepo, a berry which has a thick rind and fleshy center.

Besides tasting great and being low in calories because watermelon is mostly water, it is an excellent source of Vitamin C. It has a high beta carotene concentration which offers a fair amount of vitamin A as well. Both beta carotene and vitamin A support good eyesight and helps prevent glaucoma.

High intakes of combined beta-carotene and vitamin C have demonstrated, through clinical and scientific studies, to have antioxidant values, which assist in warding off various cancers and heart disease, reducing arthritis symptoms, and minimizing asthmatic breathing problems.

A surprise nutrient is vitamin B, especially B1 (thiamine) and B6 (pyridoxine). Thiamine is important for maintaining electrolytes and nervous system signal transmissions throughout the body. Pyridoxine is essential for enzymatic functions that convert food into cellular energy.

The meat or pulp of watermelons is usually pink or red. Those colours indicate the highest content of lycopene, an antioxidant studied for its ability to greatly minimize cancer risks. From the Worlds’ Healthiest Foods website, we read “… lycopene has been repeatedly studied in humans and found to be protective against a growing list of cancers. These cancers now include prostate cancer, breast cancer, endometrial cancer, lung cancer, and colorectal cancers.”

Then there are the minerals of potassium and magnesium, which watermelons also offer abundantly. Potassium is important for cardiovascular health and brain health and helps the kidneys eliminate kidney stone forming calcium as well as assists with the body’s fluid retention.

Magnesium is considered the master mineral. It is involved with over 300 cellular metabolic functions, such as bone and muscle formation and is the fourth most abundant mineral in the human body. Magnesium deficiencies symptoms include: low energy, weakness, fatigue, hormonal imbalances, inability to sleep and more.

We all need to eat healthier and exercise more. Why not have fun doing the eating part?

So go ahead and bite into one of those delicious and healthy watermelons. They are even better if you can buy a locally grown watermelon, so make sure you look for those.

Think about this ­– God never gives up on making something beautiful out of our lives.

Here in Chatham-Kent ‘WE GROW FOR THE WORLD’. Check out our website at wegrowfortheworld.com