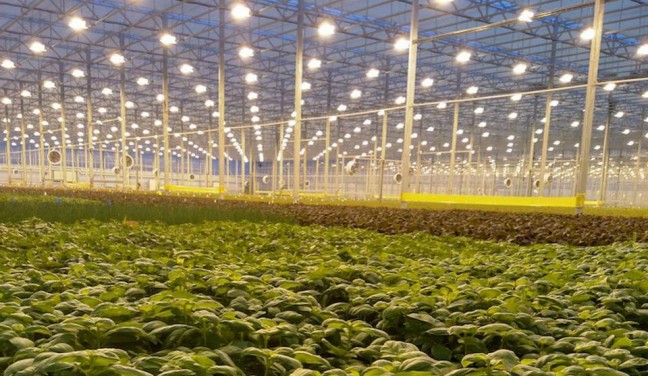 By Maggie McGrath and Chloe Sorvino

When our nation was founded 241 years ago, farming was the economy’s primary driver. By 1870, nearly half of the employed population held jobs in agriculture. Today, it’s a $3 trillion industry – but only 2% of Americans hold a farm-oriented job.

This is, in many ways, thanks to technology. Tractors and other automation advances in the 20th century let large farms shift management to only a handful of people. But this, paradoxically, has also slowed things down in the 21st. With only a few people working every farm, there’s not a lot of time – or incentive – to innovate.

But even farmland isn’t immune to the information revolution. Today, there are hundreds of agriculture tech startups around the world, and some experts say the situation reminds them of the early days of the internet: There’s a lot of activity in agriculture, but no clear winners yet – it’s hard to say who might become the Facebook or Amazon of the scene. Couple that with climate change pressures, the fact that two billion more people will live on this planet by 2050, and that just 40% of the world’s land is available to grow crops, and you have yourself a market ripe for innovation — and big money.

“The ag tech space right now is in a very unique position. You can’t ignore the fundamentals,” says vice president of Business Development at AgTech Accelerator Corp., Corey Huck. “You have to produce a lot more crop on limited acres, and 70% of fresh water is already being used in agriculture. We have to do more with less at the end of the day and the only way you can do that is with technology.”

From irrigation hardware engineered to beat the drought to biotechnology startups cultivating future cash crops, Forbeshas identified the 25 most innovative pieces of burgeoning technology in this space. Together, they have more than $400 million in financing. Those investments come from the likes of the Bill and Melinda Gates Foundation, Kholsa Ventures, GV (formerly Google Ventures), Monsanto Ventures and Andreessen Horowitz, as well as in-house venture capital arms like Campbell Soup’s Acre Ventures. Even President Barack Obama’s former White House chef is getting in the game.

To find the 25 ag-tech startups that carry the most potential, we surveyed the agricultural technology landscape by speaking with experts, venture capitalists and accelerators; then, we examined financials and each company’s agricultural credentials. A special thanks goes to Seana Day at the Mixing Bowl for her comprehensive research on the ag-tech environment.

In alphabetical order, here is the fruit of that labor: 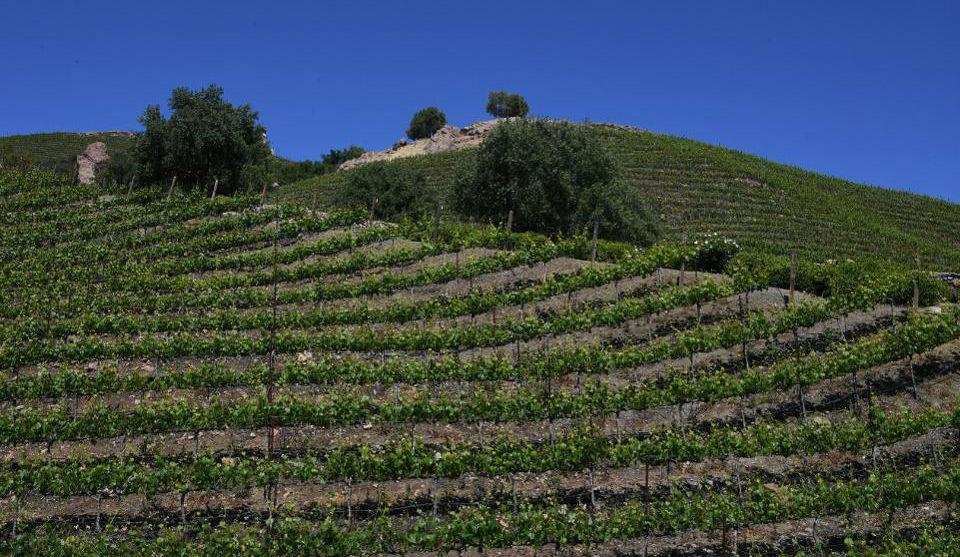 AgCode: This vineyard management company helps winegrowers track harvests, field conditions and grape maturity in order to maximize yields and manage labor. Oenophiles are on board: seven of the country’s top ten wineries use AgCode’s technology. Ag cred: in February, scored an undisclosed investment from Cavallo Ventures, the VC arm of Wilbur-Ellis. AGERpoint: This startup produces nut and citrus orchard management software that uses satellite data. The data is granular enough to provide tree-specific information, like the size of the canopy or the trunk diameter. The company expects to break-even in 2017 with $3 million in sales. Ag cred: Has raised nearly $9 million at a valuation of about $30 million. 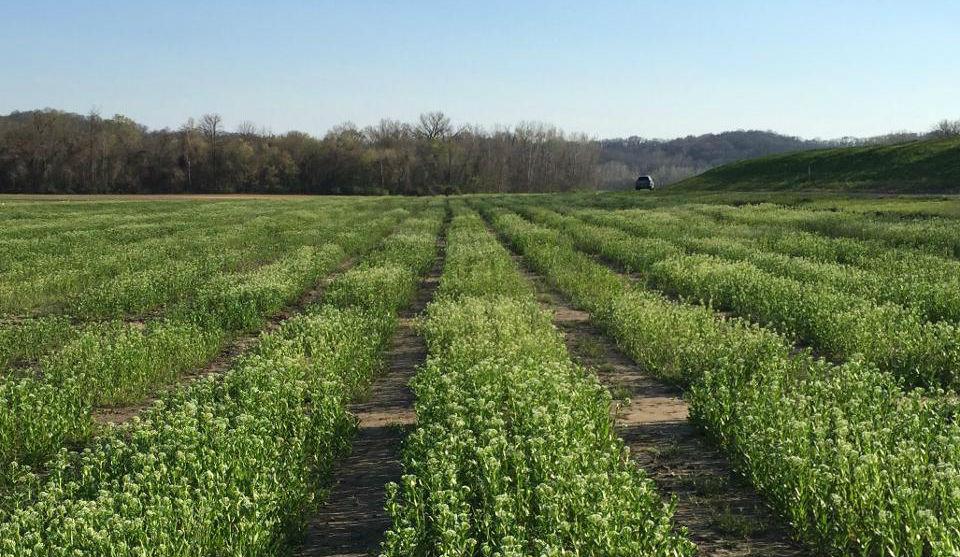 Arvegenix: Former Monsanto executives lead this startup, which is developing a new cash-crop called pennycress that can be added to field rotations between corn and soybeans. The winter cover crop protects the soil from erosion and soaks up nitrogen pollution – and makes money for farmers. Ag cred: Monsanto Ventures led the last funding round.

BluWrap: Using a patented oxygen management technique that extends the shelf life of fresh protein, BluWrap allows fresh protein suppliers to ship by ocean rather than by air, saving on costs. Ag cred: Anterra Capital, the international food and ag growth VC, is an investor in the company, which has raised $18.6 million. 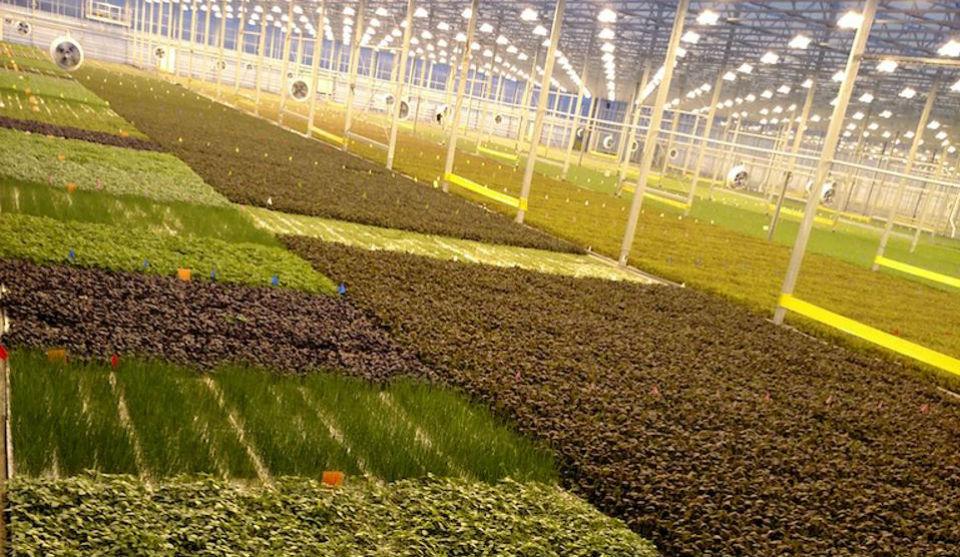 BrightFarms: The demand for hyper-local produce is booming, and BrightFarms is building and operating greenhouses in urban and suburban areas. The company partners with supermarkets like Giant, ACME, and Pick-n-save and puts the farm at or near the store to maximize produce freshness. Ag cred: The company has raised $57.9M in equity to date. 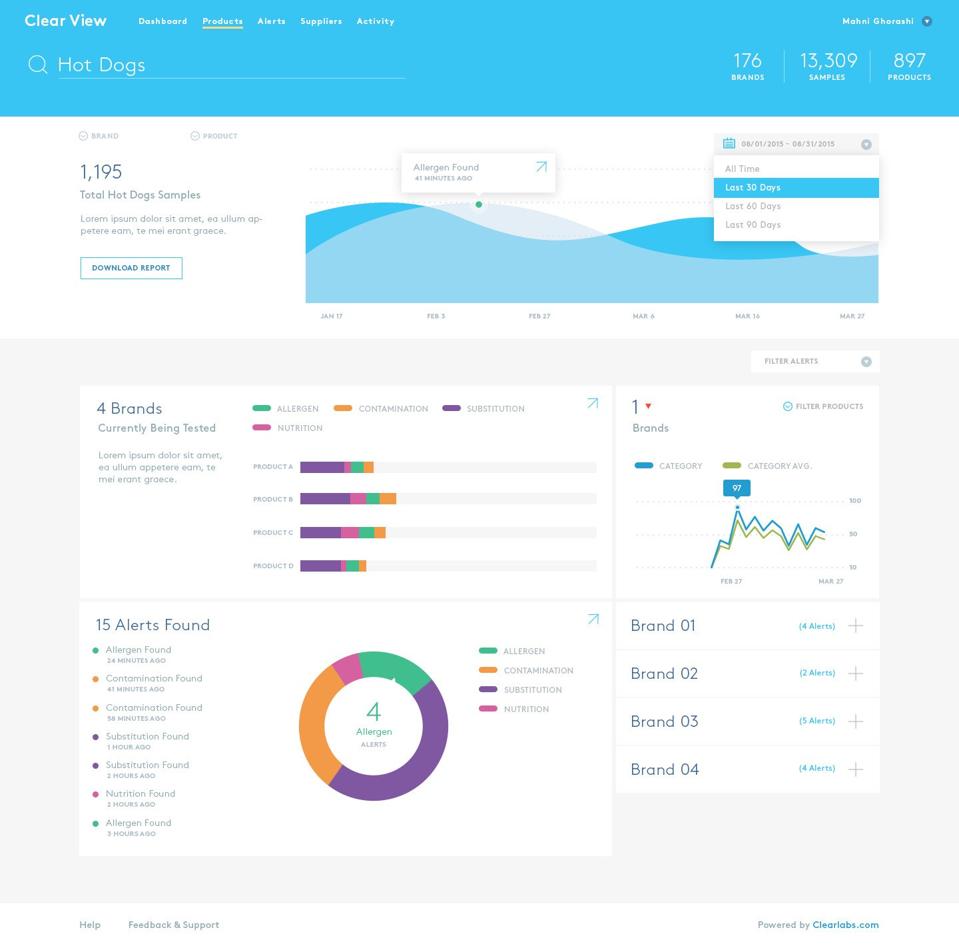 Clear Labs: This science startup is making a database of the world’s food supply by studying food on a molecular level. The goal is to use the information to help food retailers pick the best suppliers and avoid the next crippling food borne illness outbreak. Ag cred: Per Pitchbook, has $21.2 million in funding; investors include Khosla Ventures and GV. 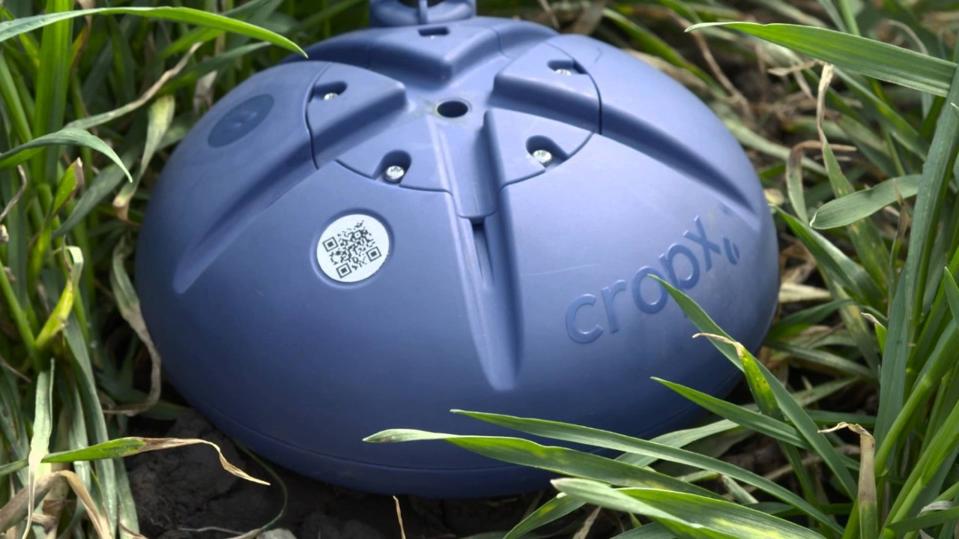 CropX: An Israeli startup, CropX sells cloud-based software which aims to boost crop yields by focusing on saving water and energy. With in-field sensors, the system automatically delivers the correct amount of water to each plant instead of watering a whole field at a time. Ag cred: Founded in 2013, the company has raised $10 million.

Farmer’s Business Network: This big data company connects over 3,400 small farms with open data about yields, supply prices and other information that lets them compete with large operations. Ag Cred: Raised over $83 million in funding from the likes of GV and Double Bottom Line Partners.

FarmLead: An online marketplace for grain, FarmLead lets grain growers expand beyond their local market and sell to the best bidders. Buyers and sellers can register for free, and deals are negotiated anonymously. Ag cred: Monsanto Growth Ventures led their Series A.

FoodLogiQ: The average food recall costs companies $10 million. FoodLogiQ aims to reduce those costs by using data to track a supply chain (i.e, food) from the farm to the fork, ensuring the correct foods are recalled. Ag cred: Works with more than 3,500 food companies, including Whole Foods, Subway, and Chipotle. 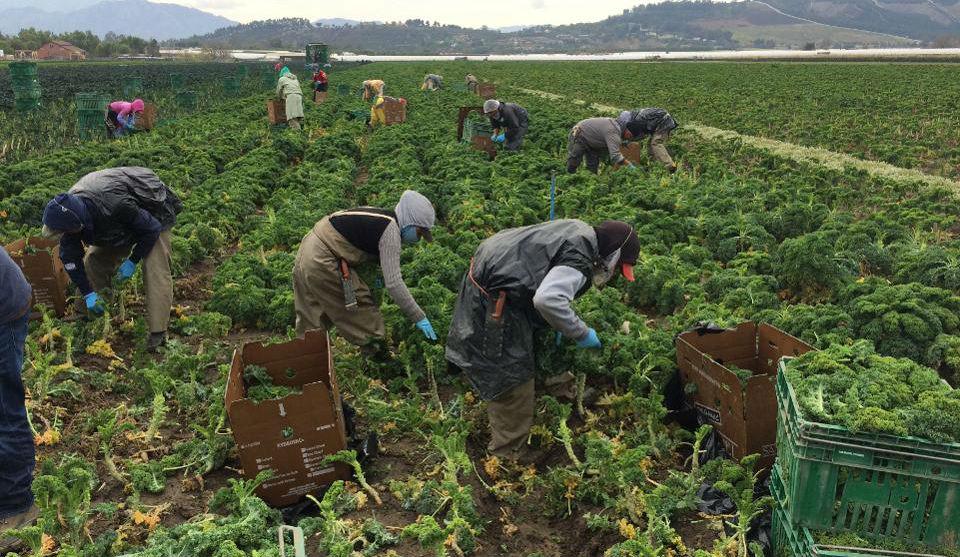 Full Harvest: 20 billion pounds of “ugly” produce go to waste in the U.S. each year. Full Harvest is trying to reduce that waste by building a B2B marketplace where growers can connect with food companies to offload surplus or imperfect produce. Ag cred: Won the Innovation Award at United Fresh, one of the biggest produce conferences in the U.S. 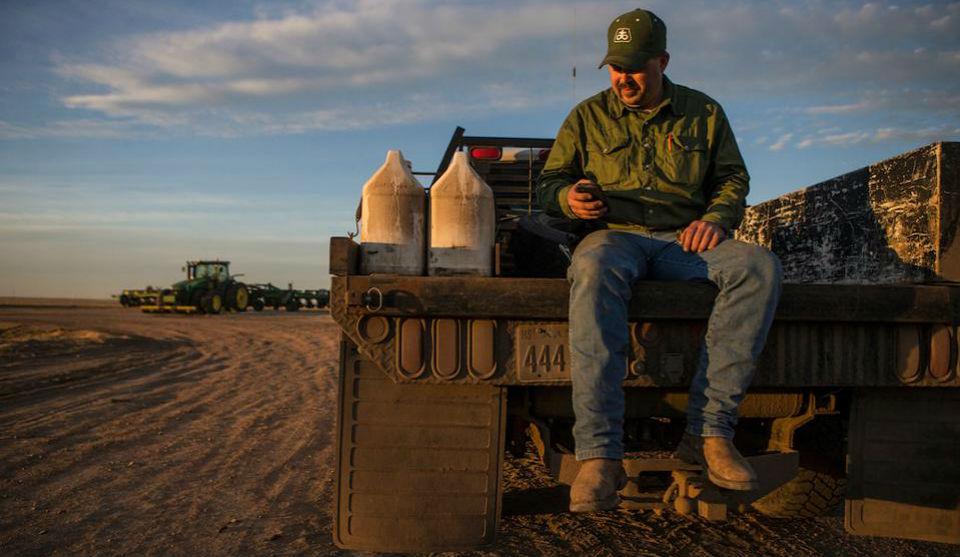 Granular: Big retailers stay nimble with the help of data-driven software to help them track everything. Granular’s software does this for farmers, allowing them to prioritize their workforce, monitor profitability, forecast revenues and more. Ag Cred: Raised over $24 million in capital from likes of Andreessen Horowitz, Tao Capital Partners and Khosla Ventures.

Mavrx: This startup’s software allows farmers to visualize their entire fields in an instant, highlighting areas where resources need to be directed and benchmarking crop performance. Ag Cred: Have raised over $22 million from the likes of Bloomberg Beta, Crosslink Ventures and more.

mOasis: mOasis is making a non-toxic gel-like soil additive that helps seeds get farther on less water. It works by holding extra water near a plant’s roots and releasing it was the soil dries out. Ag cred: a field test from UC Davis found the product provided 30% yield increase for broccoli – using 25% less water. 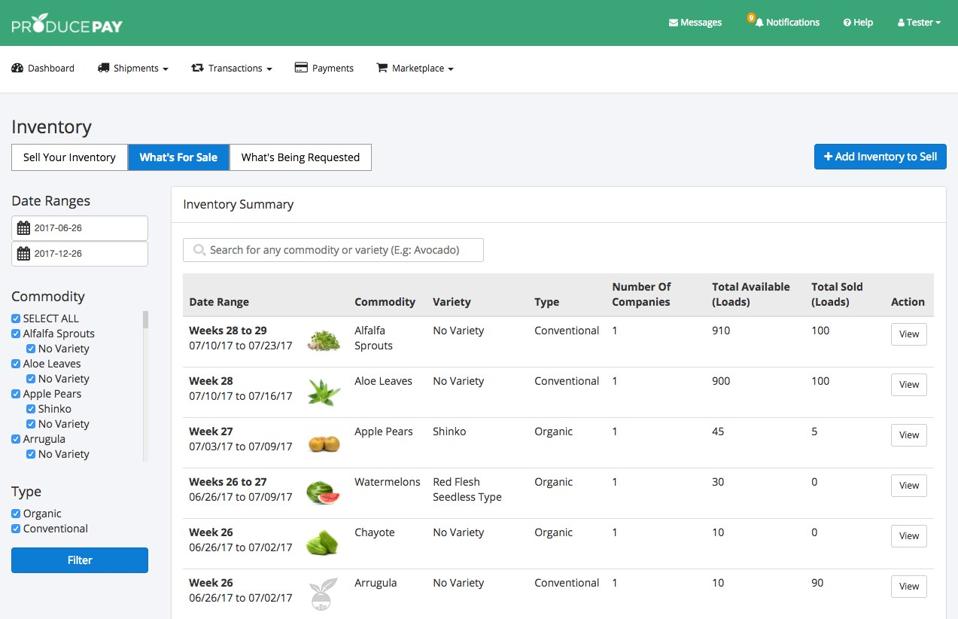 Produce Pay: Founded at Cornell University in 2014, this supply chain startup aims to fix cash-flow problems by paying for the product the day after it is shipped, rather than the typical 30 – 45 day waiting period. Ag cred: Its total funding is $13.4 million from the likes of CoVenture and Menlo Ventures, along with $70 million in debt financing.

RipeIO: Former financiers are bringing blockchain technology to the food supply chain. Its algorithms crunch data to calculate sustainability scores, as well as scores for spoilage and safety levels. Ag cred: Joined the first cohort of the Terra Accelerator, backed by Rabobank, RocketSpace and Nestle USA.

S4: Argentina-based precision ag company with a fintech side that pays producers or companies along the supply chain when systemic risks like drought or flood occurs. The startup expects $2 million in revenue by the end of the year. Ag cred: Raised $3.5 million ahead of its series A. 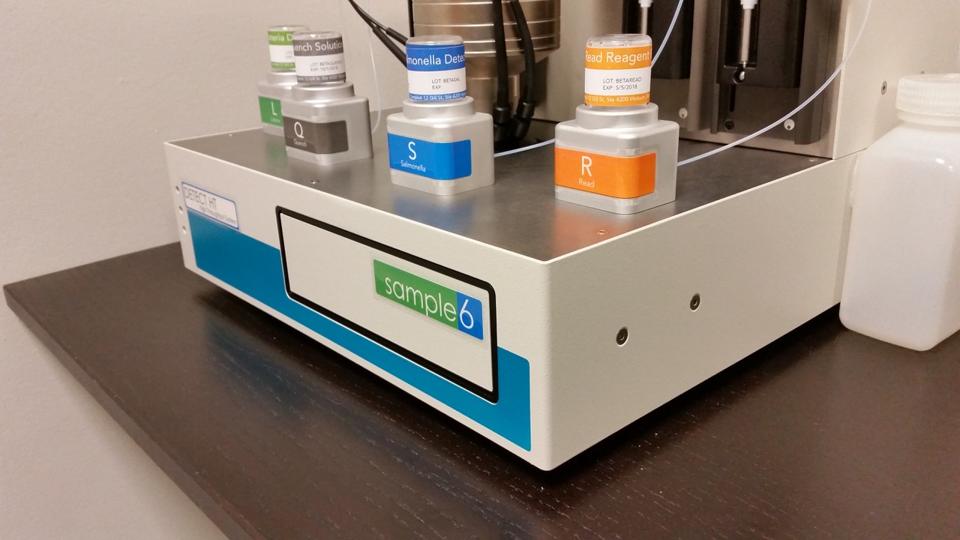 Sample6: Sample6 claims to be “the world’s fastest food pathogen detection system” by detecting a bug within 6 hours. Its products can detect pathogens and listeria in plants. Ag cred: Has raised more than $30 million from the likes of Campbell Soup’s VC Acre Venture Partners and Sam Kass, the former policy advisor and personal chef to President Barack Obama.

Spensa Technologies: Its software lets farmers record, upload and track observations about their fields; its Z-Trap hardware allows farmers to track pests in the fields by trapping and identifying bug species. Ag Cred: Developed hardware with a National Science Foundaiton grant; has raised over $5 million in outside funding to date.

Strider: A Brazil-based ranch management startup that sells a pest monitoring application which allows farmers to monitor and decide how to treat infestations. Ag cred: Has raised $5 million from the likes of Qualcomm Ventures.

SWIIM: The patented process behind SWIIM, or Sustainable Water and Innovative Irrigation Management, monitors water budgets and computes data. This allows a large-scale water user, like a farm or a utility company, to better manage usage. Ag cred: Partners include Western Growers Association while CA’s Metropolitan Water District is a client. 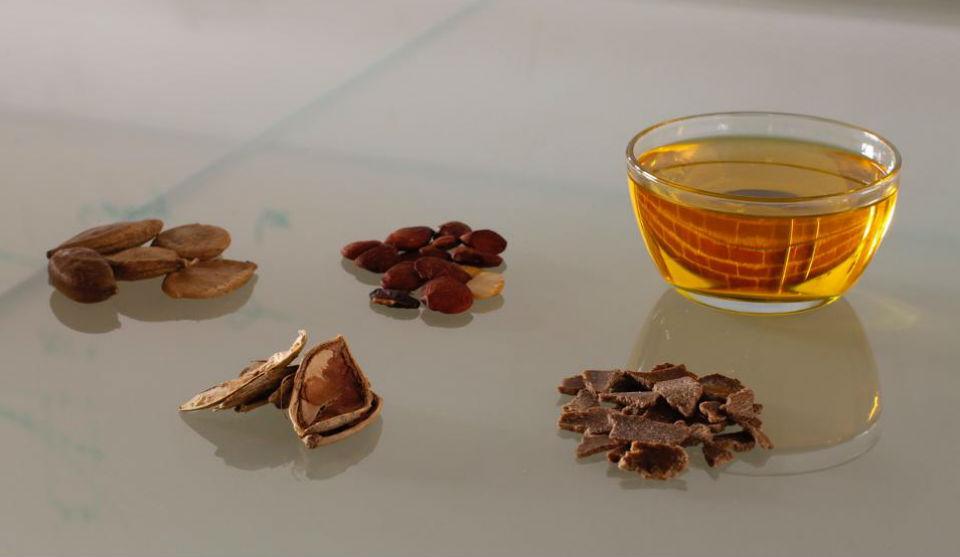 Terviva: An Oakland-based company that is cultivating the pongamia tree, which is native to Australia and India, on American soil. The trees produce an oilseed with 10x more yield than soybeans and have the potential to create a biofuel alternative. Ag cred: Company is valued at $32 million after raising about $15 million. 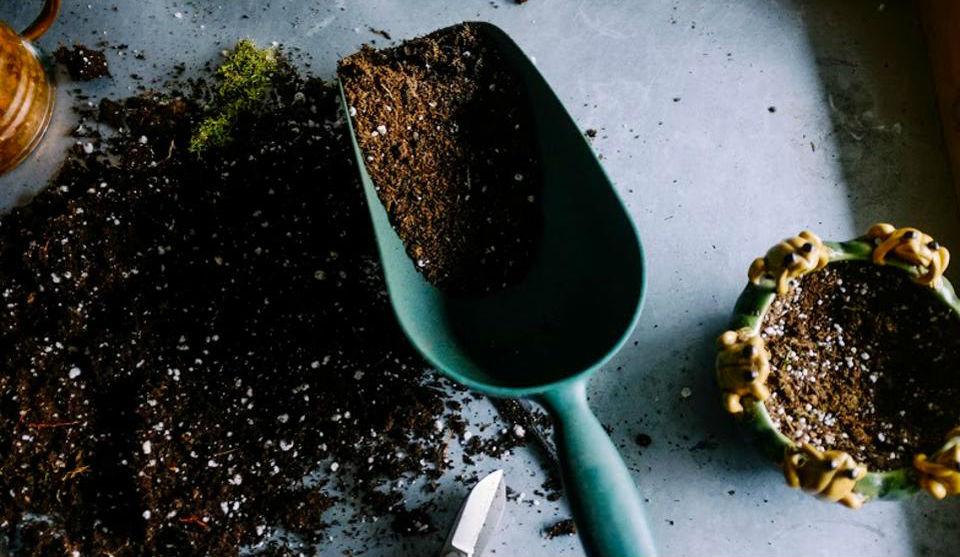 — With editing by Alex Knapp