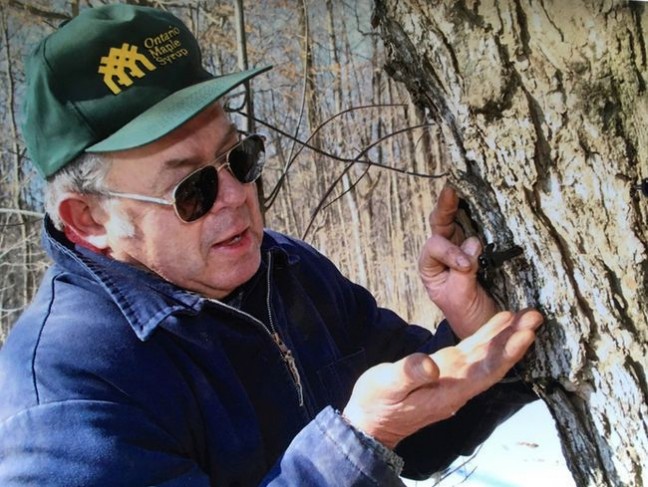 Columnist Kim Cooper pays tribute to the late Don Giffin, whose maple syrup operation in the former Harwich Township drew praise and awards from Chatham-Kent and beyond.

If anyone in the Chatham-Kent area mentions maple syrup, Don Giffin was the guy whose name came up. Maple syrup and Don Giffin. The two were a great duo for so many years.

Just a few weeks ago, Don passed away peacefully and suddenly at home. This was a tragic loss for his wife Jean and the rest of Don’s family. Don’s passing was also a huge loss for this community.

Don was one of those guys who was always ready to talk to you, to give you some advice, and to listen to you. In fact, he called me the week before he passed away with an idea for one of my articles. He said there was no hurry in getting back to him. Not knowing exactly what Don’s idea was, I thought a better tribute was to write about this man who was kind, gentle, hard working, generous and a great example of a Godly person to his family and to his community.

Don and Jean were married for 44 years and were such a great example of a loving couple. They did so many things together, accomplished so much together, and raised an amazing family together.

During my travels around the municipality, I would often stop in at their farm just to chat with Don, and also to buy some maple syrup. Don was always welcoming, so matter how busy he was with his farm work or other work. Often, that other work was volunteering with many groups and organizations he was involved with. The annual Shrewsbury Pancake festival was one of his favourites. He loved that time of year and was so proud of the Shrewsbury community.

Don graduated from Ridgetown College in the class of 1970 with a diploma in Agricultural Technology. He farmed all his life in Harwich Township and was actively involved in the local community with agriculture, church and heritage concerns. Don loved singing in his church choir and his faith in God was such a huge part of who he was as a person.

Don and Jean began farming operations in 1973 as Willow Creek Farms, along with Don’s parents Gerald and Marion Giffin, which consists of 400 acres of cash crops. Don and Jean began their maple syrup operation in 1980 and have 2,800 taps in their 50-acre maple bush.

Don was the main worker in the maple bush and had four seasonal workers during the main maple syrup season. Maple syrup is of course their main product, but they also produced maple candy, maple butter, maple jelly, maple stirred sugar, and maple candy floss. Don always credited Jean with coming up with so many novel ideas for maple syrup.

Don and Jean also authored the “Simply Maple Cookbook”, which is a collection of 280 maple syrup recipes.

Don and Jean have also been recipients of a number of awards, including: the 1997-98 World Champions in Maple Syrup; the 1999 Charles P. Corbet Trophy for the highest score in maple sugar classes; and the 2000 Maple Syrup Award from the Premier of Ontario. Along with maple syrup production, Don also grew cash crops, and in 2013 he won the Ontario Seeds Growers award with the highest yield in soybeans for all of Ontario.

Don and Jean were also designated by the Chatham-Kent Chamber of Commerce as the ‘Feature Industry of the Month’ award in April 2015.

Don and Jean Giffin have always been strong community supporters, and gave their time, sponsorship, and involvement to many local community organizations and events.

Don’s mission was to always foster good work ethics and produce maple syrup that was delicious with hospitality that is genuinely Canadian.

In the Bible, the New Testament book of Second Timothy, chapter four and verse seven says this: “I have done my best in the race, I have run the full distance, and I have kept the faith.”

Don Giffin accomplished this and so much more. He will be truly missed.

Think about this – This life on earth is not all there is. Make sure you are prepared for your eternal life by getting right with God.