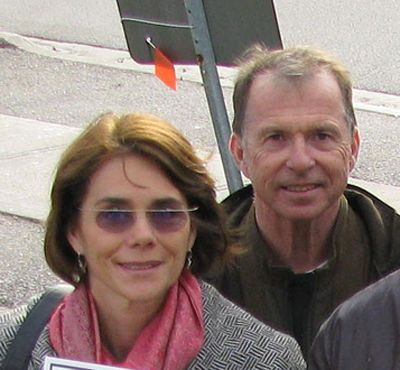 By Tom Morrison, Chatham This Week

Dave and Brenda Baute were among seven inductees into the Kent Agricultural Hall of Fame who were formally recognized at a ceremony on Tuesday. The Tilbury couple founded Maizex Seeds Inc. over 30 years. Maizex is now the fourth largest seed company in Canada.

The latest additions to the Kent Agricultural Hall of Fame include the founders of a local seed company, a pair of broadcasters, a leader of bringing drainage to Jeanette’s Creek in the 1880s and the founders of a diversified agri-business.

The seven new members were inducted during a ceremony at the Country View Golf Course Tuesday.

Dave and Brenda Baute were recognized as the founders of Maizex Seeds Inc. in Tilbury, which they started in 1985. Dave is also the chair of the Agri-Food Foundation at Ridgetown Campus and a past president of the Canadian Seed Trade Association. He also manages a 2,500-acre seed farm called Soiex Farms.

Brenda is the chief financial officer at Maizex and has helped it grow into the fourth-largest seed corn company in Canada. She has also organized corn detasseling crews of as large as 100 students for 25 years. She has been behind an annual bursary for summer students going to college or university for over 10 years.

Jack Beardall founded CFCO radio in 1926, one of the first privately-owned radio stations in Ontario. He was introduced to wireless voice communication during the First World War as a member of the Royal Flying Corps. He then started tinkering with wires, circuits and batteries in his basement.

Beardall was appointed the Radio Inspector for the Chatham District for the Department of Transport in 1925 and created the largest radio club in Canada at the time with 2,000 members. That year, he also built a shortwave radio station and received a government license to broadcast at 630 AM the next year, starting CFCO, which stands for Calling from Chatham Ontario.

Programming at the station included Canada’s first Home and Farm Hour and Harold Smith’s Farm Report. Beardall sold the station to Great Lakes Broadcasting in 1962 and died in 1969.

Harry Forbes led a campaign to have a drainage system installed in Tilbury East Township near Jeanette’s Creek in the 1880s. The land he planned to cultivate with crops, pasture, his cattle and harvest marsh hay was too wet at the time. He tried to prevent leakage on his own, but the materials he used were too light, so he appealed to the township council for a ditching and pumping project for all of Jeanette’s Creek, but there was no interest.

He submitted two petitions to council in 1884 and 1885 and the county engineer was directed make a survey and report, which was adopted by a bylaw in August 1885. Some councillors were strongly against this and the bylaw was overturned by a technicality, but Forbes and supporters appealed to the courts to compel the township to build the drainage and they won.

Work began on the Forbes Pumping Scheme in 1887 and included a wooden dash wheel which could throw 3,000 barrels of water with its three revolutions per minute.

Value of land around Jeanette’s Creek subsequently went from $2 an acre to $40 to $50 and acre.

John Jordan began his broadcasting career as the host of CBC Radio Noon in Windsor in 1970 and created an agricultural public relations firm while doing freelance writing for farm publications across Canada at the time. He became the news director and agriculture reporter for the CKSY radio station in Chatham in 1986.

Jordan was hired in 1991 by the Ontario Ministry of Agriculture and Food where he sent out the Farm Market News to inform farmers of the prices of commodities and later helped bring the database into the digital age. After retiring in 2005, Jordan wrote a regular column called From the Verandah in the Ontario Grain Farmer.

He is a lifelong farmer from the former Raleigh Township and is currently share cropping and gardening.

They also set up a greenhouse vegetable transplant company in 1990 called Labradel Plants Inc., which has now been passed to the next generation.

They currently produce 80 to 100 million vegetable plug transplants each year. By 1998, Laprise Farms had become the largest brussels sprouts producer in Canada.

The Laprises are the host family for the 2018 International Plowing Match and Rural Expo. They are providing the farmland for the tented city, RV park, tractor park and the majority of the plowing land.