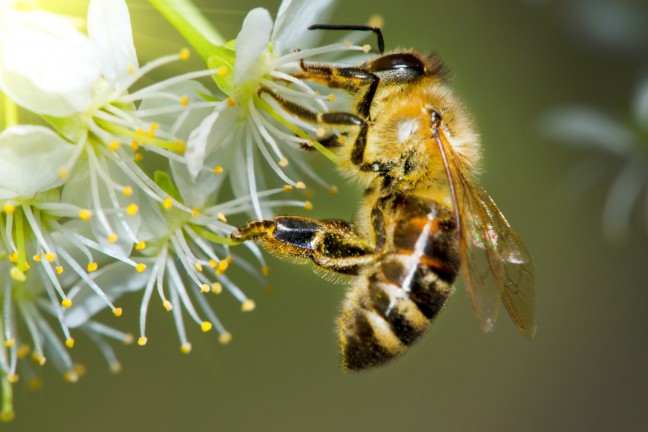 The three most widely used neonicotinoid pesticides for flowering crops pose no risk to honeybee colonies when used correctly as seed treatments, according to new studies by University of Guelph researchers.

Amid mounting controversy over use of neonicotinoids (neonics) and declining bee populations, a new analysis by U of G scientists of previously unpublished studies and reports commissioned by agri-chemical companies Bayer and Syngenta – as well as published papers from the scientific literature – shows no significant ill effects on honeybee colonies from three common insecticides made by the companies.

The findings are described in five papers published this month by Keith Solomon, a toxicologist and emeritus professor with the School of Environmental Sciences, and adjunct professor Gladys Stephenson in the Journal of Toxicology and Environmental Health-B.

The duo analyzed 170 unpublished studies that Syngenta and Bayer had submitted to regulatory agencies. They also included 64 papers from the open, peer-reviewed literature on the topic.

Acknowledging that these three pesticides can kill individual honeybees and may also pose a threat to other pollinators, Solomon said: “At least for honeybees, these products are not a major concern. Use of these neonics under good agricultural practices does not present a risk to honeybees at the level of the colony.”

The U of G scientists were asked by Bayer and Syngenta to assess earlier studies conducted by or for the companies on impacts of pesticide-treated seeds on honeybees.

They conducted weight of evidence assessments, an approach developed specifically for these studies that is intended to gauge the quality of reported data and to compare relevance of results from different studies.

The companies wished to respond to controversy and inconclusive evidence about the potential harm posed to pollinators by neonic pesticides, said Solomon.

All pesticides in Canada must be registered with the Pest Management Regulatory Agency.

The study involved three pesticides – clothianidin and imidacloprid made by Bayer, and thiamethoxam made by Syngenta – that are used in seed treatments for various field crops.

Solomon said the original papers varied in quality and scientific rigour, but their results generally showed no adverse effects of pesticides on honeybee hives.

“Many studies look at effects of insecticides on individual bees. What regulations try to protect is the colony — the reproductive unit.”

He said other researchers might use their results to improve studies of pesticide exposure in hives.

The U of G researchers stressed the importance of “good agricultural practices,” including ensuring that seeds are coated and planted properly to avoid air-borne contamination of bees during field seeding.

Solomon said their results don’t necessarily apply to other insects that also serve as crop pollinators and that have shown population declines. For those pollinators, he said, “there are too few studies at the colony or field level to allow a weight of evidence analysis.”

The U of G researchers said bees and other pollinators are affected by potentially harmful factors, including long-distance movement of colonies for crop pollination as well as mites and viruses, weather, insufficient food and varying beekeeping practices.