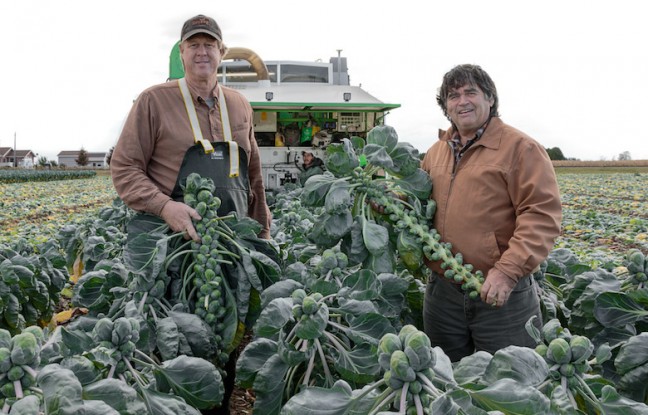 From The Grower
By Karen Davidson

“Brussels sprouts are a very labour-intensive crop,” explains Laprise, during a field tour near Pain Court, Ontario. “The crop is planted May 1 and doesn’t get harvested until late October and November, so that’s six months of scouting for disease, insects and fertility requirements.

The cold-season crop is vulnerable to disease such as Alternaria and to insects such as aphids, diamondback moth, cabbage loopers and imported cabbage worm. The cruciferous vegetable is also vulnerable to other lower-cost, temperate-climate jurisdictions in California, the Netherlands and Belgium where harvesting can take place over months rather than the nine-week period in Ontario. The partners invested in another state-of-the-art harvester this year, but as the behemoth rolls efficiently through the crop, remember that the iron is unproductive in storage for 10 months of the year.

Altogether, 115 staff are needed from the field to packing line to clean, sort and pack for two end users:  the fresh market at Ippolito Produce in Burlington and freezer processor Bonduelle in Tecumseh. Not every Brussels sprout is destined for prime time, nestled beside the festive turkey. Take a closer look at the buds which form between the stems of the stalk. The growth habit of the plant is such that only 20 per cent of the sprouts meet the 1 1/8 inch to 1 3/8 inch size requirements of the fresh market. The marble-sized remainders must find a home in the processing sector.

As Laprise inspects the end-of-season packing line, searching for efficiency improvements, he points out that several million dollars have been invested over the years to keep competitive. The business has significant risk with very limited market opportunities. The crop contract is not negotiated under the umbrella of the Ontario Processing Vegetable Growers but directly with buyers. Brussels sprouts are not carrots, potatoes or broccoli where there is higher consumer demand and volumes.

“Our capital costs per unit are much higher than competitors,” says Laprise. “The increase in Ontario’s minimum wage ($14/hour as of January 1) is going to affect our competitiveness and I don’t think we will be able to recapture the money from the marketplace. We have driven costs out of our system for the last 25 years, and now I don’t know where to turn. Extra labour costs will negatively impact our profit margins.”

As much as the newspaper headlines have focussed on minimum wage increases, Laprise is more worried about the Pest Management Regulatory Agency (PMRA) and its re-evaluation of critical crop protection products such as Bravo, Admire and others affecting production of Brussels sprouts and other vegetable crops.

“We are extremely concerned that we will lose access to important pesticides for disease and insect control,” says Laprise. “It’s crucial for us to produce quality product for the market, otherwise our customers will buy from the U.S. and Europe. The PMRA is now at a point where it will sell out Canadian agriculture if it’s not careful and Canadian consumers will be getting its produce from China, Mexico and the U.S. where they can use the same pesticides that we may not. Quite seriously, PMRA could kill the vegetable industry.”

Dave VanSegbrook brings perspective from a recently completed trip to the Netherlands.  “Admire (imidacloprid) was removed from registered usage three years ago in the Netherlands. Since the loss, growers have witnessed reduced quality from increased and uncontrolled insect pressure. This has led to higher costs and more discards from the packing shed. A neighbouring country still has registration of imidacloprid, not having to bear the increased costs and reduction in revenue that the growers in the Netherlands now suffer.”

The law of unintended consequences is at play. One of the key themes in the produce industry is how to reduce food waste. By banning specific crop protection products, regulators may not have realized the consequence of increased waste in the field and on the packing line as growers try to meet customer demands for quality produce. This is more evidence of the complexity of growing specialty crops.

Specialists in a specialty commodity

Ippolito Inc has been marketing Brussels sprouts since the 1970s, a track record that makes the firm a specialist in a specialty commodity. In fact, the company is one of the major suppliers to North America.

“Canadians at that time consumed more Brussels sprouts than our neighbours to the south,” recalls Steve Dimen, co-chief operating officer, Ippolito Inc., Burlington, Ontario. “In order to create a 12-month program for Canada, Joel Ippolito travelled to the Baja peninsula of Mexico in 2001 when he started test plots. The success of this program has positioned us well for the healthy eating trend in the last 15 years.”

With growth in the retail market, the company has spent time and dollars on research and development for value-added sprouts. The result is a microwaveable bag for whole and half sprouts in addition to a line of shredded sprouts. All of these items are washed and dried prior to packaging.

“Laprise Farms represent a very important piece of our local Brussels sprouts program,” says Dimen. “They have been growing partners with the Ippolito’s for more than 25 years. Unfortunately, the local season only lasts a couple months every year. To ensure we have a good supply for 12 months, we diversify our program throughout the southwestern United States and Mexico.”